Kentucky drops to 2-2 after loss to Mississippi State. 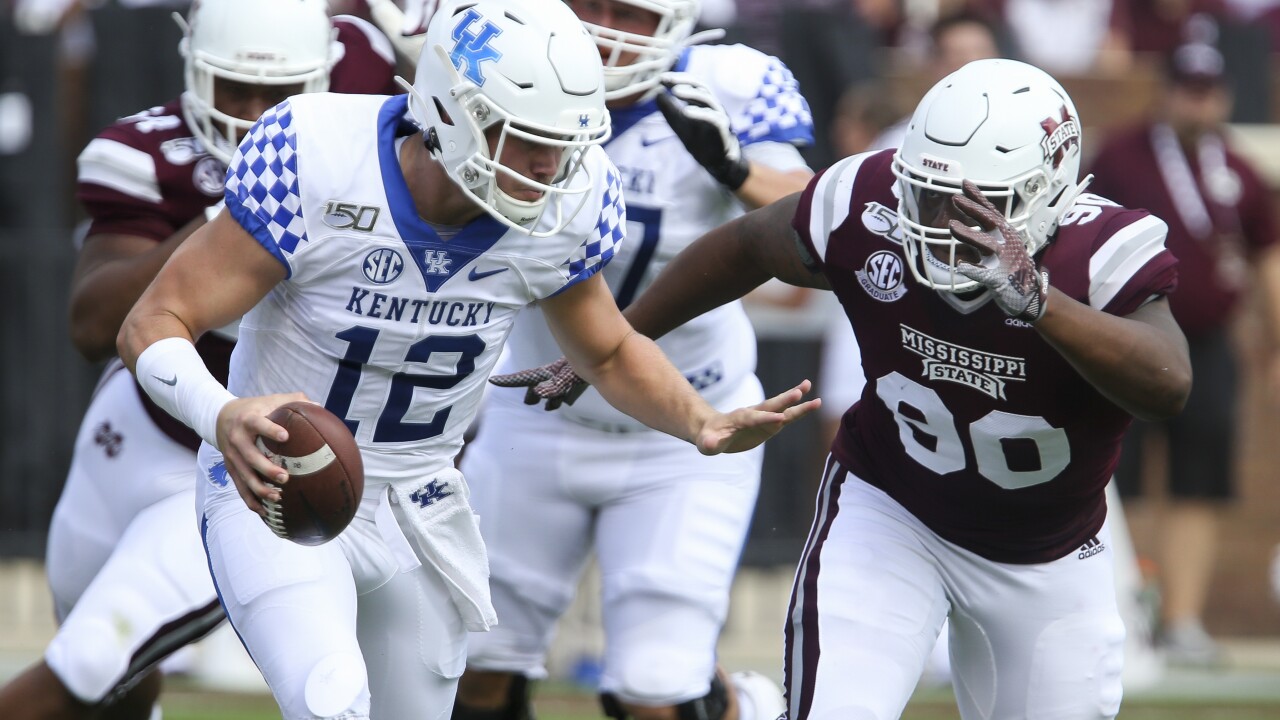 The Kentucky defense took the field without Kash Daniel Saturday. It was Mark Stoops' decision to keep him off the field after Kash allegedly tried to twist the ankle of quarterback Kyle Trask in last week's game against Florida.

He would return to the field early on in the second quarter.

On offense, it was a tough start for the Wildcats as Sawyer Smith threw a pick-six just over a minute into the game.

A.J. Rose was the highlight of Kentucky's offense in the first half, including a 31 yard run that would set up a 40 yard field goal by Chance Poole, cutting the Wildcat deficit to 7-3.

The Bulldogs added to their lead early on in the second quarter with a 12 yard touchdown run by Kylin Hill, making it 14-3.

Mississippi St. looked to be heading for another touchdown with time winding down, but Kentucky's Quandre Mosley intercepted a pass with 48 seconds left.

However, the Wildcats could not take advantage after Chance Poore missed a 47 yard field goal to close the half.

Prior to the beginning of the second half, Sawyer Smith was taken to the locker room to be evaluated for an injured shoulder.

There were discussions that Henry Clay alum, Walker Wood, would take the field for the Wildcats but Smith returned to the field.

The defense would come through again with their backs at the goal line on the opening drive of the second half.

Brandin Echols would force a fumble, recovered by Kentucky.

The Wildcats would finally find the end zone with a touchdown run by Kavosiey Smoke, cutting the deficit to 21-10 with 5:30 left in the third quarter.

The defense would force another punt, and Sawyer Smith helped lead the offense back down the field. The Wildcats went 72 yards, setting up a 28 yard field goal attempt for Poore. He missed it, and Mississippi State still held on to a 21-10 lead with 12 minutes to play.

Kentucky pulls to within 21-13 after a 29 yard field goal by walk-on kicker Matt Ruffulo with just under 5 minutes to play.

On Mississippi State's ensuing drive, they would lock up the victory with help from key plays by true freshman quarterback Garrett Shrader. Hill would get his third touchdown of the game and Mississippi State gets the 28-13 win.

The Wildcats drop their second game in a row and are back on the road next weekend at South Carolina.