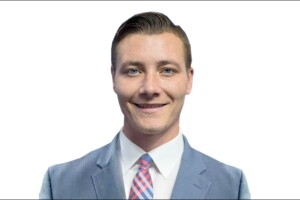 Eli joined the LEX 18 Sports Team in August of 2018 as a reporter and anchor. Originally from Moline, IL, Eli spent his college years at Northern Illinois University where he was the Sports Director at the university’s Northern Television Center. He graduated in 2013 and was hired as a morning photographer and editor at WNDU-TV in South Bend, IN. He would quickly transition into sports, becoming the Weekend Sports Anchor for three years.

While in South Bend, Eli covered numerous Notre Dame football games and was a sideline reporter for WNDU’s Countdown to Kickoff, a live one hour pregame show on the field at Notre Dame Stadium before ND home games. He also covered numerous NCAA Tournaments with the Irish men’s and women’s basketball teams, including Elite 8 appearances for the men and the historic National Championship run for the women in 2018. He covered Notre Dame hockey in the Frozen Four in 2017 as well.

During his free time, Eli enjoys going to the gym, playing golf when the weather allows it, and hanging out with his longtime friends. He is excited to be a part of the LEX 18 Sports Team and covering Big Blue. Give him a follow on Twitter at @EliGehnLEX18 or send him an email with story ideas to egehn@wlex.tv.