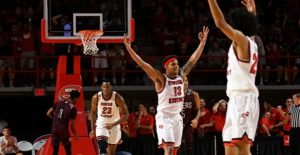 CONWAY, S.C. — WKU Hilltopper Basketball was tested throughout its Myrtle Beach Invitational opener by Valparaiso on Thursday, before pulling away in the final minutes for an 83-71 victory.

The Hilltoppers (2-1) got 48 combined points from redshirt junior guard/forward Jared Savage and sophomore guard Taveion Hollingsworth and outrebounded the Crusaders 41-31.

WKU advances to face either West Virginia or Monmouth in the tournament semifinals at 8 p.m. CT Friday on ESPNU.

“I think we got to the free-throw line by throwing it inside, driving it inside and just slowing the game down and scoring with the clock not running,” Savage said. “And then on defense, I think we picked it up a little bit from last game and got stops.”

Savage finished the game with a career-high 25 points and five made 3-pointers, while Hollingsworth added 23 points, a career-high nine rebounds and three steals.

“Our bench came out pretty good and gave us some energy,” Hollingsworth said. “We got some stops. Once we got in the flow of things, we got some stops and it started creating our offense.”

Sophomore guard Josh Anderson had nine points, seven rebounds, three assists and three steals. The Hilltoppers shot 50.9 percent from the field and made 20 of 33 free throws.

“Josh made a good read coming off that center screen and skipped it to Jared – that was a good basketball read he made,” WKU head coach Rick Stansbury said. “We want him aggressive and attacking that rim … and there was more good than bad. Every game he plays at the point guard spot is a learning experience, and he’s going to get better from it.”