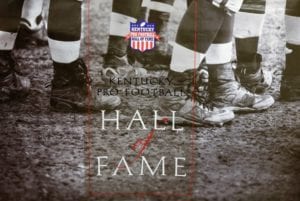 (Lexington, Kentucky) – The Kentucky Pro Football Hall of Fame is celebrating its 17th Induction Class slated for June that will benefit the Salvation Army Boys & Girls Club of the Bluegrass in Lexington.

“Kentucky is the only state in the country with a pro football hall of fame,” said Dr. Steve R. Parker, chair of the Kentucky Pro Football Hall of Fame, Inc. board of directors.  “We’re in a unique position to recognize great accomplishments in football, but also have as our main objective to offer financial assistance to organizations that enrich the lives of children.”

“We’re excited about our relationship with Salvation Army Boys & Girls Club of the Bluegrass whose purpose is to increase the quality of life for children from Kentucky and throughout the world, “said Parker.

Being inducted into the Kentucky Pro Football Hall of Fame in 2019 are:

The legendary Jim Host will receive the 13th annual Blanton Collier Award for Integrity, named after the famous UK and Cleveland Browns coach. The award recognizes individuals who have shown outstanding integrity both on and off the field.  Mr. Host is an American businessman best known for founding Host Communications, a pioneering collegiate sports marketing and production services company. Host is credited with implementing the first collegiate corporate marketing program with the NCAA in 1985. He later became commissioner of the Kentucky department of parks and, as founding Chairman, helped to start the Kentucky Horse Park. In 2010, the Kentucky Horse Park hosted the World Equestrian Games (WEG) and from 2006 to 2009 Host served as the Chairman of the WEG.