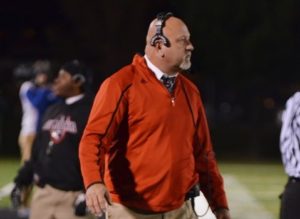 GEORGETOWN, Ky. – The inaugural season for Great Crossing High School athletics will kick off on August 23, 2019 with the Battle of the Birds when GCHS and SCHS face off for the first time.  Coach Jason Chappell, selected to lead the Warhawks in January, has spent months hiring qualified staff and developing relationships with future players and families.

Unfortunately, selling his home in Corbin has proven to be much more difficult for Chappell than building the football program at the new high school.  As a result, the husband and father of three young children has made the decision to resign his post as head coach.

Chappell leaves the school and team in good hands.  Coach Paul Rains has been an active part of the efforts to build the Warhawks bench and will now take the helm as head coach of the Great Crossing Warhawks.

Coach Rains was honored as Class A Kentucky Coach of the Year twice.

“I am extremely excited to take over the Great Crossing football program,” stated Great Crossing Head Football Coach Paul Rains.  “I have gotten to know the players and parents of our program over the last several months and it is easy to see that something special is happening within this upstart program.”

Rains believes the Great Crossing coaching staff in one of the best he has worked with during his long coaching tenure.  The team will continue to focus on developing the whole player.

“The success of our work will be determined 10 years from now when we see the kind of men, husbands, fathers, and leaders our players become.”

District Athletic Director DT Wells is excited about the future of football in Scott County.  “Coach Rains is vested in our community and is a proven winner, he fits the mold of the championship caliber coaches that we have throughout Scott County Schools.”