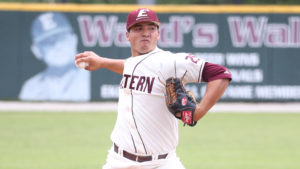 GREENVILLE, N.C. – Two days after being drafted by the Los Angeles Dodgers, Eastern Kentucky University closer, and Lexington, Kentucky native, Aaron Ochsenbein was selected as one of six finalists for the 15th annual National Collegiate Baseball Writers Association (NCBWA) Stopper of the Year Award, the organization announced on Thursday.

On Tuesday, Ochsenbein was drafted in the sixth round by the Dodgers in the Major League Baseball (MLB) Draft.

Ochsenbein was selected as a second team All-American by Collegiate Baseball and first team All-Ohio Valley Conference this season.  He had a 5-2 record with a program best 0.83 ERA and 10 saves.  The 6-foot-3, 225-pound Ochsenbein struck out 90 batters in 54 and one-third innings.  He allowed just five runs, 24 hits and 16 walks.  Opponents had a .133 batting average against him.

The NCBWA’s All-America Committee will select the winner, with this year’s recipient to be announced Saturday, June 15, at a news conference at TD Ameritrade Park Omaha at 11 a.m. (ET).