Mahomes 'here to stay' after signing 10-year extension with Chiefs

Contract reportedly will be richest in sports 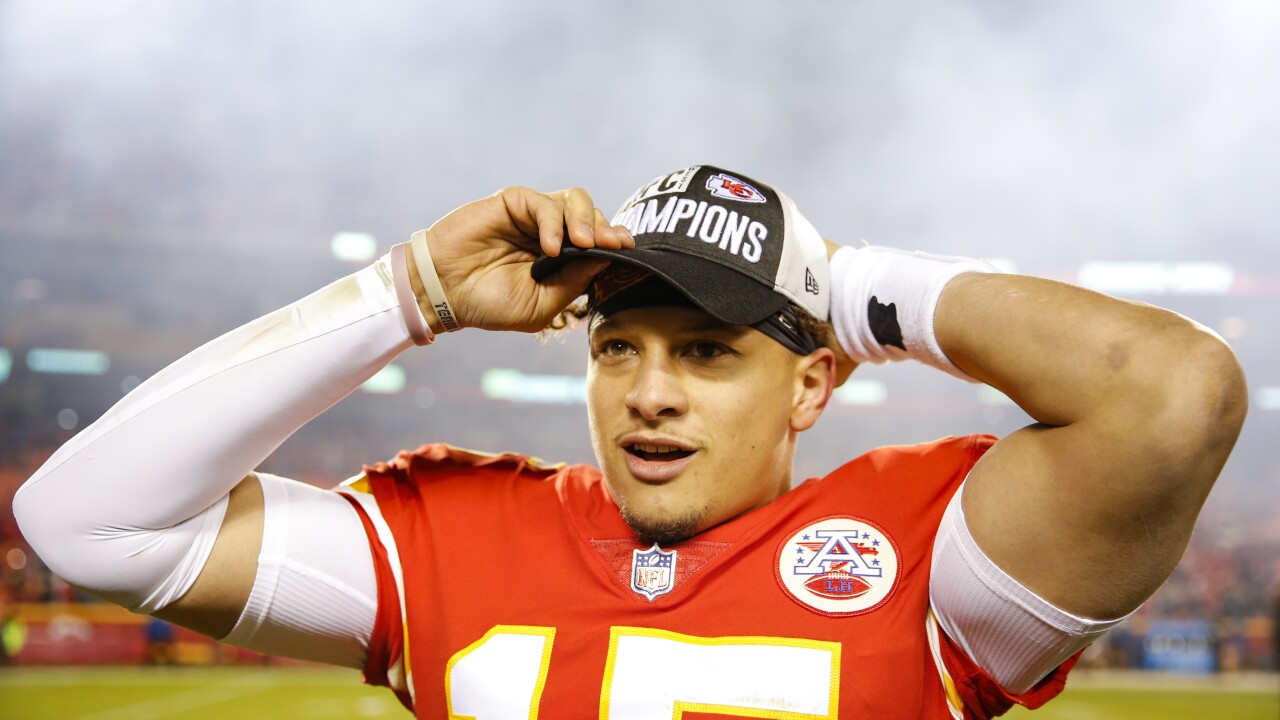 The Kansas City Chiefs announced Monday that star quarterback Patrick Mahomes signed a 10-year contract extension, which reportedly will be the richest contract in sports history.

The Chiefs confirmed the 10-year extension, which is in addition to the two years remaining on his current rookie contract, via social media several hours later.

We have signed QB Patrick Mahomes to a 10 year extension. Mahomes secured with Chiefs for the next 12 seasons. pic.twitter.com/ZsADdVkvxZ

Kansas City exercised its fifth-year option on Mahomes' rookie deal earlier this spring, but this offseason marked the first time the club had the chance to negotiate a long-term extension with Mahomes.

In a tweet, Mahomes said he's "here to stay."

Clearly, Chairman and CEO Clark Hunt, who watched the Chiefs wander the NFL wildness for decades unable to draft and develop a franchise QB, and General Manager Brett Veach weren't messing around.

“This is a significant moment for our franchise and for the Chiefs Kingdom,” Hunt said in a statement from the team. “Since he joined the Chiefs just a few years ago, Patrick has developed into one of the most prolific athletes in all of sports. With his dynamic play and infectious personality, he is one of the most recognized and beloved figures to put on the Chiefs uniform. He’s an extraordinary leader and a credit to the Kansas City community, and I’m delighted that he will be a member of the Chiefs for many years to come.”

Veach said the Mahomes extension "has been a priority for us for quite a while now" and thanked his agents, Chris Cabott and Leigh Steinberg, "for their efforts and patience" along with his own staff for getting the deal done.

"I’ve said from the beginning that Patrick is one of the most impressive players I’ve ever scouted, but I don’t think anyone could have envisioned everything he’s brought to our football team and community," Veach said in a statement from the team. "His abilities are so rare, and to couple that with an incredible personality is outstanding. We’re going to continue to do everything we can to surround him with talent, and this deal provides us more flexibility to do that. He’s obviously an integral part to our success and we’re thrilled he’s going to be the quarterback of the Kansas City Chiefs for a long time."

It didn't take much convincing to get coach Andy Reid, who cemented a Hall of Fame legacy by guiding the Mahomes-led Chiefs to the Super Bowl LIV title, on board with keeping Mahomes around as long as possible.

“I’ve had the privilege of coaching a lot of incredible athletes and special people in my career, and Patrick is without question on that list of players.” Reid said in a statement. “The best part is he’s still early in his career. He’s a natural leader and always grinding, whether that’s on the field, in the weight room or watching film, he wants to be the best. He’s a competitor and his teammates feed off his energy. He makes us all better as an organization and we are blessed he’s going to be our quarterback for years to come.”

Mahomes' decade-long extension, which matches the longest contract extension in league history and keeps the 24-year-old Mahomes with the Chiefs through the 2031 season.

Chiefs and QB Patrick Mahomes have reached agreement on a 10-year -- 10-year! -- contract extension that ties him to Kansas City through the 2031 season, league sources tell ESPN.

Exact terms of the deal were not announced Monday, but Schefter later said the deal would be worth $450 million overall with $140 million guaranteed for injury.

No other NFL player is currently signed beyond the 2026 season.

The injury guarantee is $140 million, per source.

The contract does not contain language that ties its value to a percentage of the salary cap.

The Chiefs traded up in the first round of the 2017 NFL Draft to pick Mahomes at No. 10 overall.

He spent his rookie season learning the offense and the professional ropes under Alex Smith's tutelage, making one start in the regular-season finale at Denver that season.

During his first season as Kansas City's starting quarterback after Smith was traded, Mahomes led to the Chiefs to the top seed during the regular season and the AFC Championship Game, the first one ever hosted at Arrowhead Stadium. He also was selected as the 2018 NFL MVP.

After bouncing back from a dislocated knee early in 2019, Mahomes led the Chiefs to the franchise's second Super Bowl title in February 2020, picking up Super Bowl MVP honors along the way.

New England's Drew Bledsoe signed a 10-year, $103-million extension in March 2001, though he was injured in the second game of the 2001 season and replaced by Tom Brady in the Patriots' lineup.

Atlanta signed quarterback Michael Vick to a 10-year deal worth $130 million in January 2005, but he was out of the league two years into the contract after pleading guilty to federal charges related to a dog-fighting ring.

With the two existing years on the deal, Mahomes will be owed $475 million during the next 12 years,

His 10-year extension is worth over $400M, though it's still uncertain how much over.

Mahomes' deal will easily surpass current Falcons quarterback Matt Ryan's $150-million contract, a five-year deal signed two years ago, for the richest in terms of total value in NFL history by more than triple the amount.

The most-lucrative NFL contract in terms of annual value is Seattle Seahawks quarterback Russell Wilson's four-year deal, which he signed last year and pays him an average of $35 million per season.