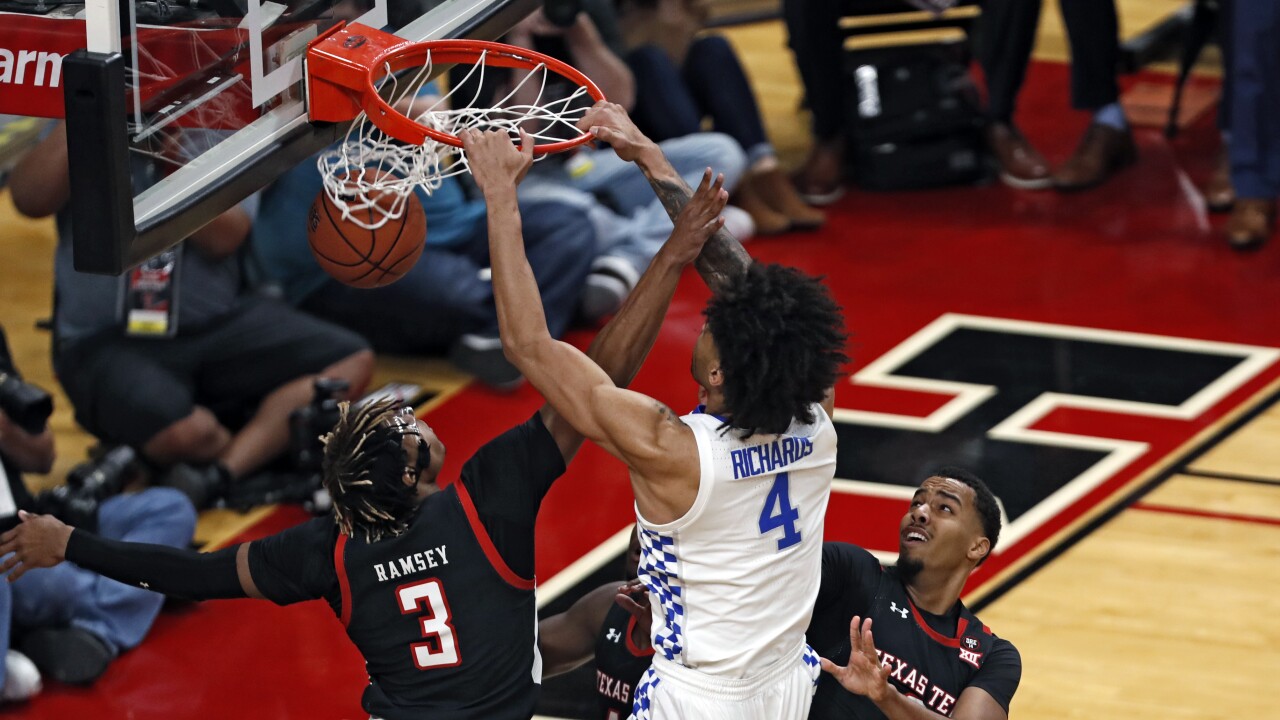 LUBBOCK, Texas (LEX 18) — Nick Richards recorded a double-double and hit two go-ahead free throws late in overtime to lead No. 15 Kentucky to a thrilling 76-74 victory over No. 18 Texas Tech in the Big 12/SEC Challenge.

Immanuel Quickley (21 points) also broke double figures for the Wildcats, who improve to 15-4 (5-1 SEC) on the season.

Kentucky built a 31-28 lead before Texas Tech went on a 6-0 spurt to take a three-point lead with just 36 seconds on the clock and bring the United Supermarkets Arena crowd to it's feet.

The Wildcats stretched their lead to 10 points, 48-38, off a pair of free throws from Tyrese Maxey at the 16:17 mark of the second half. The Red Raiders crept with five points, 52-47, off a Davide Moretti jumper before Nate Sestina drilled a 3-pointer at the top of the key to stretch Kentucky's lead back to eight points.

TTU once again crept within five points just moments later before another 3-pointer, this one from Johnny Juzang, gave Kentucky a 58-50 lead with 9:32 to play.

With Kentucky holding on to a 61-53 lead, the Red Raiders went on a 10-2 run to tie the game at 63 with 2:40 to play. Neither team hit a field goal the rest of regulation as Richards and Moretti each went 1-2 from the free throw line to round out the second half scoring. Kentucky had a chance to win the game late, but Quickley's 3-pointer missed off the mark.

Richards opened overtime with a pair of free throws and an old-fashioned 3-point play to give Kentucky a five-point lead.

Edwards answered with a layup before Sestina drilled his second 3-pointer of the night to stretch the Wildcats' lead to six points with 3:00 left in the overtime period. Once again, the Red Raiders rallied and tied the game at 72 with 1:13 to play.

With the game tied at 74, the Wildcats got a defensive stop and Richards was able to draw a foul while battling for a loose ball to send himself to the free throw line with 10 seconds to play. Richards drilled both free throws to give Kentucky a 76-74 lead.

Moretti tried to come up with the equalizer in the final seconds, but Hagans was able to knock the ball loose from Moretti which eventually led to a Red Raider turnover with less than a second on the clock. The final tenths of a second were ran off on a deep pass as Kentucky escaped with the two-point win to round out non-conference play.

Kentucky hosts Vanderbilit (8-11, 0-6 SEC) on Wednesday in Rupp Arena. The game will be streamed on the SEC Network.