UK Leads South Carolina 24-3 at the Half 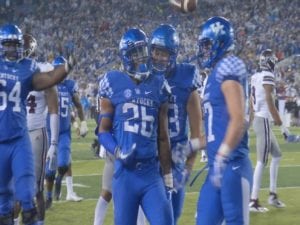 The Kentucky football team brought a 4-and-0 record and number 17 ranking into Saturday’s game hosting South Carolina. The Wildcats were also looking for a fifth straight win over the Gamecocks.

The Wildcats would strike first thanks to the defense. Deep in South Carolina territory, the Gamecocks had the ball when Jordan Jones forced a fumble and fell on it for the recovery. UK received two false start penalties that backed them up and they had to settle for a 29 yard field goal from Miles Butler for the 3-0 lead.

South Carolina would answer with a 13 play drive for 72 yards but also had to settle for a 29 yard field goal.

The Wildcats would put together its own drive but wouldn’t settle for anything less than a touchdown. Benny Snell, Jr. had a 14 yard gain that would help him cross 3,000 for his career. He passed Rafael Little for 3rd place on the UK All-time career yardage list. Terry Wilson would finish with a one yard touchdown. 10-3 UK takes the lead.

After a 3rd down stop by the defense, the UK offense went to the air. Terry Wilson hit C.J. Conrad for a 17 yard gain, then found Dorian Baker for a 20 yard pick up. After two tough runs by A.J. Rose, he had another that went for 24 yards and the touchdown. 17-3 UK in the lead.

The UK defense again went to work and Derrick Baity picked off Jake Bentley. Wilson would find David Bouvier for a 21 yard gain and then run on a broken play for 13 more. Snell would finish with a 1 yard touchdown run, the 40th of his career. UK leading 24-3.