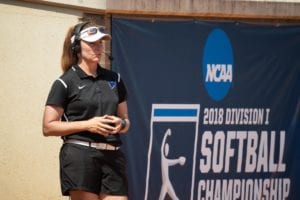 CLEARWATER, Fla. – Rachel Lawson became the first coach in program history to record 400 career wins as Kentucky’s head coach on Friday night, as the No. 21 Wildcats run-ruled both Hofstra (8-0) and Utah (13-2) in day two of the ESPN St. Pete/Clearwater Elite Invitational presented by Wilson.

In game one of the day, Larissa Spellman pitched her first-career complete-game shutout, going the distance against Hofstra, only allowing two hits in an 8-0 win over the Pride. Alex Martens clubbed a three-run home run in the opening inning, which paced the UK attack.

The Elite Invitational continues Saturday afternoon for Kentucky, as UK will face No. 11 Texas at 10 a.m. ET live on the SEC Network with Tiffany Greene (pxp) and former Texas A&M All-American, Amanda Scarbrough on the call. UK plays No. 19 Oregon at 4 p.m. ET live on ESPNU with Beth Mowins (pxp), Michele Smith (color) and Holly Rowe (dugouts). Both games will stream live on ESPN3 and the ESPN app.

Key Play
Alex Martens hit a three-run home run to right in the bottom of the first inning to ignite the Kentucky offense.

Key Player
Kayla Kowalik was the key player in the game, going 3-for-3 at the plate with a pair of RBI and a walk.

After the Wildcats loaded the bases in the bottom of the fifth, freshman Tatum Spangler singled up the middle to score Hannah Davis and walk off the Wildcats with an 8-0 win. FINAL – Kentucky 8, Hofstra 0 (5 innings)

Kentucky vs. Utah
Key Stat
10. The 10 runs scored by the Wildcats in the bottom of the second inning was the most runs scored in a single inning since UK scored 12 runs in the opening inning of a 12-run first against North Carolina in 2013 at John Cropp Stadium.

Key Play
Mallory Peyton hit her second-career grand slam in the bottom of the second inning to put the Wildcats on top 10-0.

Key Player
The key player in the game was Maclai Branson – who clubbed a near-home run to center – and notched her first-career RBI, scoring Mallory Peyton from third.

Run Recap
The Wildcats put eight batters on in a row to start the inning without recording an out. Lauren Johnson and Mallory Peyton scored on a hit to the wall by Autumn Humes. Bailey Vick singled up the middle to score Humes from third. Kayla Kowalik ground-rule doubled to center to put two in scoring position for Katie Reed. Reed walked to load the bases, and Abbey Cheek doubled to score three runs. Utah then made a pitching change, and a walk put runners on the corners. After a walk to Lauren Johnson – Mallory Peyton added four to the Wildcats’ total with a grand slam that was gone off the bat to left field. UK 10, UTAH 0

In the bottom of the third, Reed and Schaper were both hit by pitch’s and came around to score on an Abbey Cheek double and an Alex Martens sac fly. UK 12, UTAH 0

UK added a thirteenth run in the fourth as Mallory Peyton doubled and came around to score on Maclai Branson’s sac fly. UK 13, UTAH 0