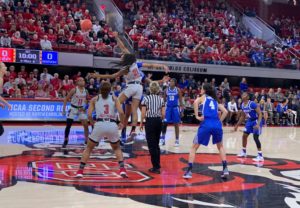 RALEIGH, N.C. – Rhyne Howard scored 21 points and Maci Morris had 18, but the 17th-ranked Kentucky women’s basketball team saw it season come to an end with a 72-57 loss to No. 10 N.C. State in the second round of the NCAA Tournament on Monday night at Reynolds Coliseum.

For Howard, the national freshman of the year, it was her 10th game this season with at least 20 points and her 26th game scoring in double figures this season.

Kentucky (25-8) also got seven points and five rebounds from Tatyana Wyatt. The Wildcats struggled with the Wolfpack’s superior size throughout the game. N.C. State won the rebounding battle 50-31, led in second-chance points 17-5 and outscored Kentucky 22-12 in the paint.

With the loss, the storied careers of Morris and fellow senior Taylor Murray came to an end. Morris finished her career in sixth place on the UK career scoring list with 1,692 points, while Murray finished 17th on the same list with 1,359 points.

Kentucky got on the board first when Morris nailed a three-pointer, but N.C. State answered with a three by Kai Crutchfield. Kentucky got a basket from Tatyana Wyatt to lead 5-3, but the Wolfpack went on a 12-2 run to take a 15-7 advantage with 3:58 left in the quarter. Howard did her best to keep the Cats close, scoring eight points in the period, but the Wolfpack built a 10-point lead before settling for a 25-17 lead after 10 minutes.

N.C. State scored first in the third period, but Kentucky answered with a jumper from Morris and another three from Howard to cut the lead to three, 38-35. But the Wolfpack scored the next six points, setting the back-and-forth theme for the quarter. Kentucky answered with six in a row of its own to get back within three, but N.C. State would hold the lead throughout the period. Kentucky got a late three from Jaida Roper to make it 53-48 after three periods.

The Wolfpack broke the game open early in the fourth period, scoring seven in a row to take a 60-48 lead. The Cats would cut the deficit to single digits three times, but UK could get no closer.