Members of the 2012 NCAA Championship Team Have Signing Appearance 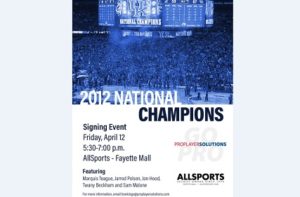 LEXINGTON, Ky. – Five players from the University of Kentucky 2012 National Championship Team will be at All Sports in the Fayette Mall Friday, April 12 from 5:30-7pm for a public signing. Marquis Teague, Jarrod Polson, Jon Hood, Sam Malone & Twany Beckham will all be on hand to meet and share stories with fans.

The players are in town to sign the 2019 Makers Mark Keeneland bottle which is the last bottle of a five bottle set started back in 2015 celebrating kentucky’s championship teams. All five players will be at Keeneland the morning of the 12th from 7am-10am to sign bottles for fans. With the limited number of tickets selling out within 30 seconds for the Keeneland signing, the players wanted to do an appearance for fans who were unable to get a ticket or unable to take off work and make it out to Keeneland.