Uncharacteristic Defensive Mistakes Cost Kentucky in Loss at U of L 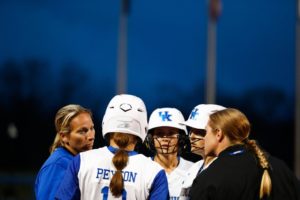 LOUISVILLE, Ky. – Costly mistakes came back to haunt the Kentucky Wildcats on Wednesday night, falling to the Louisville Cardinals, 8-7 in a walk-off at Ulmer Stadium in midweek action. The loss for Kentucky is its third straight, and the Wildcats are now 26-18 overall on the season.

UK scored two runs in the top of the seventh to tie the game, and then couldn’t force the game extras as three singles in the bottom of the seventh ended the game as the Cards walked it off.

The Wildcats committed three errors in a game, a season high – and also allowed five Louisville stolen bases – the most stolen bases the Wildcats have given up since the 2017 season.

The loss for UK is its first in the series since 2015.

UK’s season continues on Saturday as the Wildcats will welcome in the No. 14 Auburn Tigers to John Cropp Stadium for a three-game Easter Weekend series. All three games will be nationally televised with Saturday and Monday’s games shown live on the SEC Network at 7 p.m. ET. Sunday’s game will be shown at 4 p.m. ET on ESPN2. Tiffany Greene and former Alabama All-American Kayla Braud will have the call from Lexington, including “Mic’d Up Monday” as head coach Rachel Lawson will be mic’d up for the game.

With two outs in the bottom of the third inning, Louisville mounted a rally consisting of back-to-back singles and then a triple by Morgan Hensley to deep center.

After Jenny Schaper and Abbey Cheek were walked to begin the game, they both scored on an RBI single into left field by Katie Reed in the top of the first. UK 2, UL 0

Louisville quickly countered in the bottom of the first, scoring two unearned runs on a Kentucky error. UK 2, UL 2

Kentucky re-claimed the lead in the top of the second as Lauren Johnson singled to begin the rally with one out and came around to score on a wild pitch. UK 3, UL 2

In the bottom of the second, Louisville took the lead back on a UK error which scored a run, followed by an RBI triple. UL 4, UK 3

UK got one run back in the top of the third inning as Johnson doubled with Bailey Vick on second and two outs in the inning. UK 4, UL 4

Louisville scored three runs, all with two outs in the bottom of the third inning. A single by Celene Funke was followed by a Sidney Melton single, and a triple brought in two runs. A second triple of the inning to deep CF scored a third run. UL 7, UK 4

In the top of the fourth, Alex Martens went yard the opposite way to pull the Wildcats within two. UL 7, UK 5

Kentucky tied the game in the top of the seventh as Bailey Vick reached on a single and scored in a crazy rundown off a Lauren Johnson double to left. Johnson got to third on the rundown and scored on a game-tying RBI sacrifice fly from Jenny Schaper. UK 7, UL 7

Louisville won the game in the bottom of the seventh on three singles, including a walk-off single by Taylor Roby. FINAL – Louisville 8, Kentucky 7