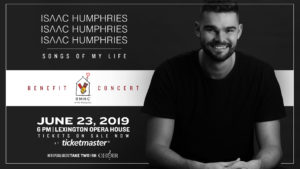 LEXINGTON, Ky. – Former Kentucky men’s basketball player Isaac Humphries is set to return to the city of Lexington to perform a benefit concert supporting the Ronald McDonald House Charities® of the Bluegrass at the Lexington Opera House.

Humphries, along with special guests, will take the stage on June 23 at 6 p.m. ET.

“I’m so excited to share this experience with my Kentucky family,” Humphries said. “While I was a player at UK, Coach (John) Calipari always stressed servant leadership and impacting the lives of others. It’s no secret that I have a love for music and I have spent years developing this very idea. I have always wanted to share this side of myself with this particular community and help this specific organization that I respect so much.

“The Ronald McDonald House is a prevalent presence on Kentucky’s campus and I have always admired what the House does for families. It was important to me to return to a community that I consider my second home and impact this organization and city that I love so much.”

Tickets are on sale now via Ticketmaster.com. Pricing ranges from $35 to a $100 VIP experience that includes a meet-and-greet with Humphries following the show. All ticket proceeds from the event will support RMHC® of the Bluegrass.

“We are extremely humbled by this opportunity Isaac has presented to RMHC of the Bluegrass and honored that he would think of us even after he’s left Lexington. That goes to show you the values Coach Cal is instilling in his players and the kind of heart Isaac has for community and giving back,” said Nate Graham, Executive Director of RMHC of the Bluegrass. “The funds raised from this concert will have a huge impact on our ability to continue to keep families close to their sick children being treated locally and the awareness it will bring to RMHC is invaluable. We are endlessly thankful to Isaac.”

Humphries and his “Songs of My Life” are inspired by the likes of recording artists Michael Bublé, John Legend and Sam Smith. No stranger to the stage, Humphries was a part of a performing arts school in his native Sydney, Australia, before moving to the Unites States.

A two-year player for the Wildcats, Humphries was a part of two Southeastern Conference championships and helped the Cats to the Elite Eight during his sophomore season in 2016-17. He spent his first season professionally with the Sydney Kings where he averaged 6.9 points, 3.6 rebounds and 1.0 blocks per game while shooting nearly 60 percent from the field. He was subsequently named the NBL Rookie of the Year. He played for the Erie BayHawks in 2018-19 before finishing the season with the NBA’s Atlanta Hawks.

The night will also feature Take Two from the Tates Creek Choir.

About the Ronald McDonald House Charities of the Bluegrass

The mission of the Ronald McDonald House Charities of the Bluegrass is to create and support programs that directly improve the health and well-being of children and to strengthen families by keeping them together in times of medical need. The Ronald McDonald House® in Lexington opened its doors in 1984 and serves over 500 families each year. In 2005, the Ronald McDonald Care Mobile® in Hazard, KY, began offering preventive dental care to children in Eastern Kentucky, right in their own neighborhood and sees nearly 2,500 children per school year. In 2009, Ronald McDonald Family Room® began operations within the walls of Kentucky Children’s Hospital (KCH) providing a quiet and comfortable area of relaxation as well as refreshments for family and loved ones of infants and children receiving care at KCH.

100% of the funding for Ronald McDonald House Charities of the Bluegrass programs is raised from the generosity of the community through fundraising events, individual contributions, corporate and foundation donations, McDonald’s Restaurants, and the guests themselves.

About the Lexington Opera House

Originally constructed in 1886 after a fire had destroyed the original theater located on the corner of Main and Broadway, the “new” Opera House was designed by Oscar Cobb. It opened its doors on July 19, 1887, and quickly gained a reputation as one of the most well-designed and well-equipped theaters in the nation. By the late 1960s, the venue had evolved from a grand theater to a Vauderville house and finally a movie theater. It was scheduled to be destroyed when an esteemed group of local philanthropists established The Opera house Fund to raise the necessary funds for the city of Lexington to purchase and restore the historic structure.