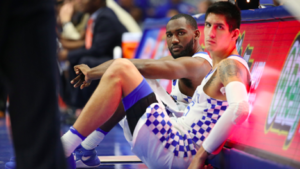 LEXINGTON, Ky. – The annual single-elimination, nationwide summer spectacle known as The Basketball Tournament is making its way to Lexington for the first time in the six-year history of the event, televised live on ESPN networks. Bluegrass Boys, composed entirely of former Kentucky Wildcats, will host seven other teams at Frederick Douglass High School on July 19-21.

TBT divides a 64-team field into eight regions for Rounds 1-3, with each region seeded 1-8. The winner of each regional competition will advance to Championship Week in Chicago on August 1-6, where the last team standing will claim a winner-take-all prize of $2 million. The champion of each regional will receive a cash prize equal to 25% of the ticket sales of that particular region.

“Playing in front of the Big Blue Nation is one of the greatest feelings a player can experience,” said Turner. “The Lexington Regional has a strong field, but with this team and these fans, I like our chances.”

In addition to cutting down the nets in both 1996 and 1998, Turner appeared in three straight Final Fours during his time at Kentucky. Willis, Hawkins and Lee made back-to-back trips to the Final Four in 2014-15, while Harrellson helped the Cats end a 13-year Final Four drought in 2011. Krebs and Harris each reached the Elite Eight during Kentucky head coach John Calipari’s first season in 2010, while Galloway and Stewart ended their UK careers under former head coach Billy Gillispie.

“I’m looking forward to getting back to Lexington this summer to support my TBT squad, Team Loyalty is Love, as we look to bring home the championship,” Cousins said. “Kentucky fans have been so great to my family and I, and it’s always special coming back. TBT is the premier basketball event in the summertime, and I’m excited to be a part of it for the first time this year.”

The Lexington Regional is rounded out by No. 3 Fort Wayne Champs, No. 5 Peoria All-Stars, No. 6 Showtime, No. 7 D2 and No. 8 Hoopville Warriors. In total, 64 players with NBA experience will be competing at TBT. Bluegrass Boys are one of 23 teams composed of alumni from the same college, while Team Loyalty is Love, KBC and D2 are three of 21 squads making their TBT debut. Puma will serve as the official partner of TBT once again.

Lexington Regional tickets may be purchased immediately at TheTournament.com with options for both daily and weekend passes. With game times subject to change, the schedule of Rounds 1-3 was announced as such on Tuesday: