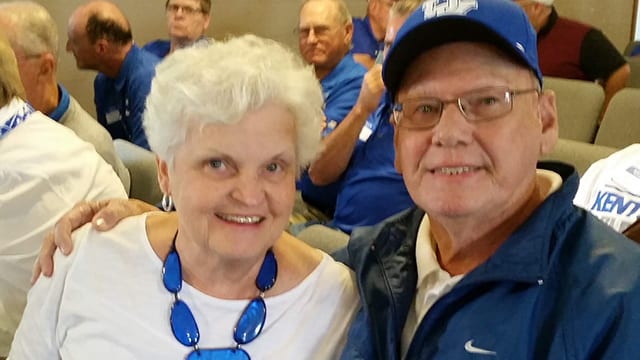 Just when I think I can’t hear another Kentucky basketball fan story that will surprise me, then I hear another one like this from Wilma Watson of Waynesville, Ohio.

This one goes all the way back to the 1978 Final Four when Kentucky beat Duke in St. Louis in the national championship game and how Watson managed to be there to watch her beloved Wildcats plays.

Watson was friends with Kentucky assistant coach Dick Parsons’ wife who had hoped Watson and her husband, Darrell, were going to be at the Final Four. Watson had to tell her they were not planning to go.

However, after Kentucky beat Arkansas in the national semifinals, Watson’s brother — who was in St. Louis for the Final Four — called to tell her he had extra tickets to the championship game.

“I told him I couldn’t come because we had to teach school,” Wilma Watson said. “But he did get us excited about being in St. Louis.”

She called the school principal who said to go ahead and attend the game, which was on Monday night. She taught about 3/4 of the day and went to Dayton for the short plane flight to St. Louis. The only problem was that the plane was grounded in Philadelphia.

“A man asked me if I was going to the game. I was in all my blue and white and he asked me what time I had to be there. I told him I didn’t know. Then he said, ‘Hurry, run, they are waiting on you.’ So we ran and got on the plan,” Watson said. “We were just barely up in the air and they announced we would be landing in Chicago.”

That’s when a stewardess came to her and said when the plane landed, get off as soon as they could and a cart would be waiting to take them to the next concourse to catch the connecting flight to St. Louis. They did what they were told and made the flight.

Still not exactly sure why she was getting such special treatment, but it got even better.

“Before we got ready to land, a stewardess said did I prefer to rent a car, get a limo or take a taxi to the arena,” Watson said. “I was not even sitting with my husband but the man next to me said, ‘Are you going to the game?’”

Watson didn’t get a chance to answer.

“The stewardess said, ‘She is singing the national anthem,’” Watson laughed and said.

So did she sing?

“Heavens no. We got to the game, but not to sing,” she said. “I still don’t know what happened. The next morning, we got on a plane early so we could get back home and teach. Some of (UK senior player) James Lee’s family was on the flight with us and the poor child cried all the way back to Cincinnati with an ear ache.”

Sports Illustrated writer Barry McDermott gave Watson national notoriety in the April 24, 1978 issue with his story, “Forty Minutes To Glory” looking back at the Cats’ surge to the national title. Here’s what he wrote near the end of the lengthy story:

“Meanwhile, Kentucky fan Wilma Watson of Waynesville, Ohio is at the Dayton airport and frantic. Can she make it to St. Louis in time for the final game? No way, says the ticket agent. ‘But I have to be there!’ she fibs. ‘I’m singing the national anthem.’ Concerned now, the agent devises a special routing that will get her to the game on time.”

“The article said I fibbed. I did not. It was a total misunderstanding that worked out for me miraculously,” she said. “I see people I know and they are still asking me if I am still singing the national anthem.’