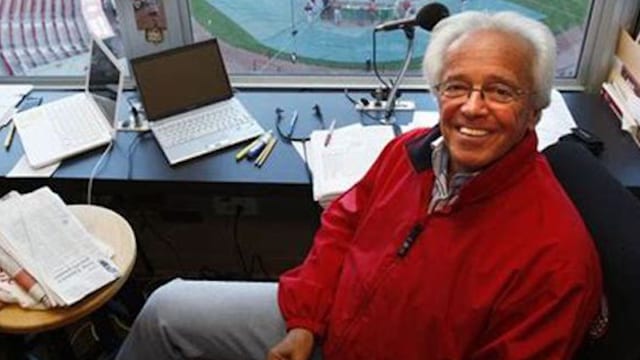 Marty Brennaman didn’t get to have too many on-court moments to cherish from the two years he worked on the Kentucky TV Network about 30 years ago with former UK star Larry Conley during the Eddie Sutton era with the Wildcats.

But off the court, Brennaman made some memories he still cherishes because of the job offer he got from Jim Host that he accepted immediately.

“The biggest thing I remember is how well I was treated,” said Brennaman, who has been the Cincinnati Reds radio play-by-play announcer since 1974 who will retire when the 2019 season ends. “They treated me like royalty at UK. I enjoyed my two years and would have continued.”

Instead, UK ended the relationship and Brennaman went to work for Jefferson-Pilot and did a season with Tom Hammond. But when the SEC got ready to expand and Jefferson-Pilot wanted him to do more games, he said no thanks.

“I had no aspirations to go to another conference. The only reason I went into the SEC was because I was only doing 12, 13 games. I could live with that,” Brennaman said. “Kentucky was not very good back then, not like now, but I had a great time. I’ve often said if the same situation was in effect today where there was a statewide local package I would do it in a minute.”

He did get approached by Host again by calling games on radio during the NCAA Tournament. He did regional games and when legendary UK announcer Cawood Ledford retired, Brennaman got a chance to do the Final Four.

He also had the NCAA Network call for the historic 1992 UK-Duke game that still haunts many Kentucky fans but produced a lasting memory for the 76-year-old Brennaman, .

“I know how Kentucky fans feel about Duke, Christian Laettner and coach K (Mike Krzyzewski) but it was still one of the classes things ever when coach K raced over and went on radio with Cawood after the game knowing it was his last game at Kentucky,” Brennaman said. “He spent time on radio with Cawood when CBS was clamoring for him but he put that on the back burner to talk to Cawood and tell him goodbye.”

Brennaman said he appreciate the time he got to spend time in various settings with Ledford and he was always gracious and helpful.

“The best thing that ever happened out of being at Kentucky was that it began my friendship with Bill Keightley,” Brennaman said. “Nobody loved that man more than me. He would want to talk Reds baseball and I would want to talk UK basketball. I thought the world of him.”

Keightley died on March 31, 2008, after suffering a fall getting off a bus on his way to see the Reds open the season.

“I thought he was the greatest guy in the world,” Brennaman said.

He also has fond memories of former Cats’ Pause publisher Oscar Combs other than saying Combs has yet to pay off on a bet they had involving baseball cards.

“If you look in the dictionary under the definition of Welshing on a bet you would see his picture,” Brennaman laughed and said. “I don’t even exactly remember the best. I just remember he never would pay. His money never sees daylight. He’s that tight. But I had great respect for him and what he did. I really did.”

Despite his Hall of Fame baseball career, he admits he misses doing basketball games.

“Nobody loved college basketball more than me. That’s why working for Kentucky where everybody loves basketball was so good,” Brennaman said. “To some extend, I am a basketball junkie. I pay attention to recruiting and who is going where and who is recruiting who.

Brennaman doesn’t like the one-and-done but doesn’t fault Kentucky coach John Calipari for taking advantage of what the NCAA and NBA have mandated.

“I am not a big fan of the NCAA, the most hypocritical organization ever,” Brennaman said. “Go back to when I worked the tournament and they wanted us to refer to players at student-athletes. Just be honest. Don’t be so hypocritical. One-and-done is not a student. They are in college to get to the next level (NBA). That’s not a knock on Kentucky or any coach or team.”

He does like the way Kentucky has been playing.

“If I had to pick one team beside Duke that has the best chance for winning the national title it’s Kentucky,” Brennaman said. “The way they have played, they are going to be hard to beat. Kentucky is close to where Duke has been all year.

“The thing about Kentucky that has been so impressive is the way they play defense. That’s a credit to the Kentucky coaches. Those players didn’t get better defensively on their own. Compared to early in the season defensively is like night and day. That’s been fun to watch.”