Battle Of The Seasons…Bill’s Blog February 5

First off, to you and yours I hope you had a terrific Weatherman’s Day.  Of course we’ll all be heading over to the mall to take back those gifts that juuuuusstt weren’t quite right, but the thought was there.  And a big thanks as always to Blue Bell for delivering our annual batch of ice cream.  One of our former weather folks, Melissa, was saddened because they don’t have Blue Bell in DC.

We’re also coming up to a very active weather time of the year as we have a battle royale taking place between seasons.  It showed up over Kentucky today as a cold front crept south of the Ohio River, but hit the brakes before crossing I-64 and went stationary.  It set up one of those great I-75 temperature maps that if you don’t like how it feels outside your house, hop on 75, drive 20 minutes and you’re in a completely different regime.

Upper 40’s in Covington, 70 in Monticello is pretty amazing.  Look at the 20 odd miles from Lexington to Frankfort and it’s almost 10 degrees.  It’s always really cool to see these fronts displayed.

We also saw fog along that front throughout the day as the warm moist air to the south came in contact with the cooler air to the north.  It condensed the water vapor and thus, fog.  The fog has become more widespread this evening with visibility reduced north of the front. 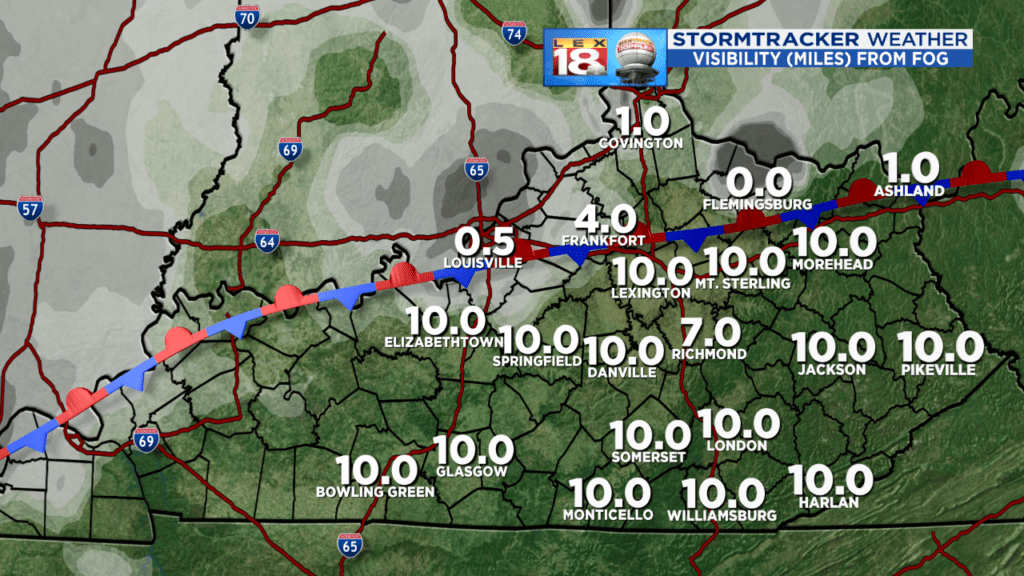 This will improve later tonight as the now stationary front becomes a warm front and heads north.

As we proceed into mid week, we’re tracking 2 areas of low pressure that will produce rain across the area.  The first arrives on Wednesday (why the front goes back north).  It will bring the first good slug of rain with it.  Some of the rain will be heavy and flooding concerns will begin Wednesday afternoon and evening, mainly in the northern half of the area, closer to the retreating front.  In addition, since we’ll be firmly in the warm sector of this storm there is at least a minor severe weather threat and that may be more across the southern half of the area where more heating and destabilization can take place.

We’ll watch the next stronger wave arrive Wednesday night into Thursday.  It will also bring a heavy rain threat and as it revs up to our north, it may also bring its own severe weather potential on Thursday.  If that materializes it would be more of a squall live event, but we’ll have to wait to watch how this whole thing evolves.

As far as the heavy rain threat, there looks to be a whole lot of water coming our way again.  There is already a FLOOD WATCH over most of the area, except the 2 rows of counties up from Tennessee and Virginia.  Rainfall may surpass 3 inches by Thursday night over a good chunk of the area (bascially all of February’s normal rain all at once).

Even away from the 3 inch plus bullseye there is a broad area of 1 to 3 inch rain possible, which is still a lot of water.  We’ll be monitoring the possibilities as they develop this week, but if you live in a flood prone area, stay alert to changing conditions and always NEVER DRIVE ON OR ACROSS A FLOODED ROAD.

Now, let’s get to some big picture items…This heavy rain threat/severe threat is likely not the last we’re going to see in the coming weeks as the aforementioned ‘Battle Royale’ begins to take shape.  This type of scenario with a heavy rain threat highlighting the Ohio Valley (or somewhere nearby) is likely to repeat.  Heavy rain like that highlights the primary battle ground between winter holding on, and spring coming on.

As the sun continues its march higher in the sky toward ironically, March, it’s heating up the southern latitudes.  Spring is indeed building as it should.  However, this year there is a vast resevoir of true Arctic air waiting for it.  It showed up vividly today as we expand that 4:00 temperature map from earlier in the blog.

You can see how the heavy rain shield above parallels the greatest temperature contrast (baroclinic) zone.  Which leads to an overall jet stream look something similar to this…

For the next 10 days to 2 weeks there looks to be a back and forth with this.  The Arctic intrusions will keep running into the heat ridge.  For now, it will go back and forth against the edge of that heat ridge, occasionally winining and allowing the Arctic air of winter to invade more territory.  Other times the warmth will say, ‘Not this time my friend’.  Storms will run along that boundary and every time they do they set up bigger weather scenarios.  When you’ve got BIG COLD versus BIG WARM there are going to be BIG CONSEQUENCES at the battle zone.  When the warm air is winning, we’re looking at these wonderful spring interludes.  However, they will be temporary and ending with rain, potentially a lot, and the increasing threat for stronger thunderstorms as we advance through February.  There will also be other times when the cold can win, push the storm track south and at some point we will likely be talking winter scenarios.  By the way, our friends across the Midwest and Plains are going to see A LOT of snow and ice over the coming couple of weeks along with quite a bit of brutal cold.

This back and forth of transitory shots of both Arctic air and spring will continue until either A) the cold air pool gets exhausted and retreats north or B) a blocking signature can situate itself up around Greenland (-NAO).  That would be a warm and stable jet stream intrusion well up in the North Atlantic by Greenland.  What that does is force the trough, which is where the cold air resides and is the ‘U’ shape on the jet stream map above, to lock in over the eastern half of North America.  If that occurs (and there is not much of a sign for it in the short term), then winter can lock in.  If it can’t, then our cold will be transitory, but given the degree of cold, our weather will be very volatile.

That’s the trade in life.  The last few springs we’ve had very little severe weather, but we’ve also been really chilly.  And February, along with meteorological winter is FAR FROM OVER so don’t be against the cold yet.  There’s lot’s of heavy hitters on the field, so it’s not going to be dull.

As always, we’ll keep you informed with what you need to know.