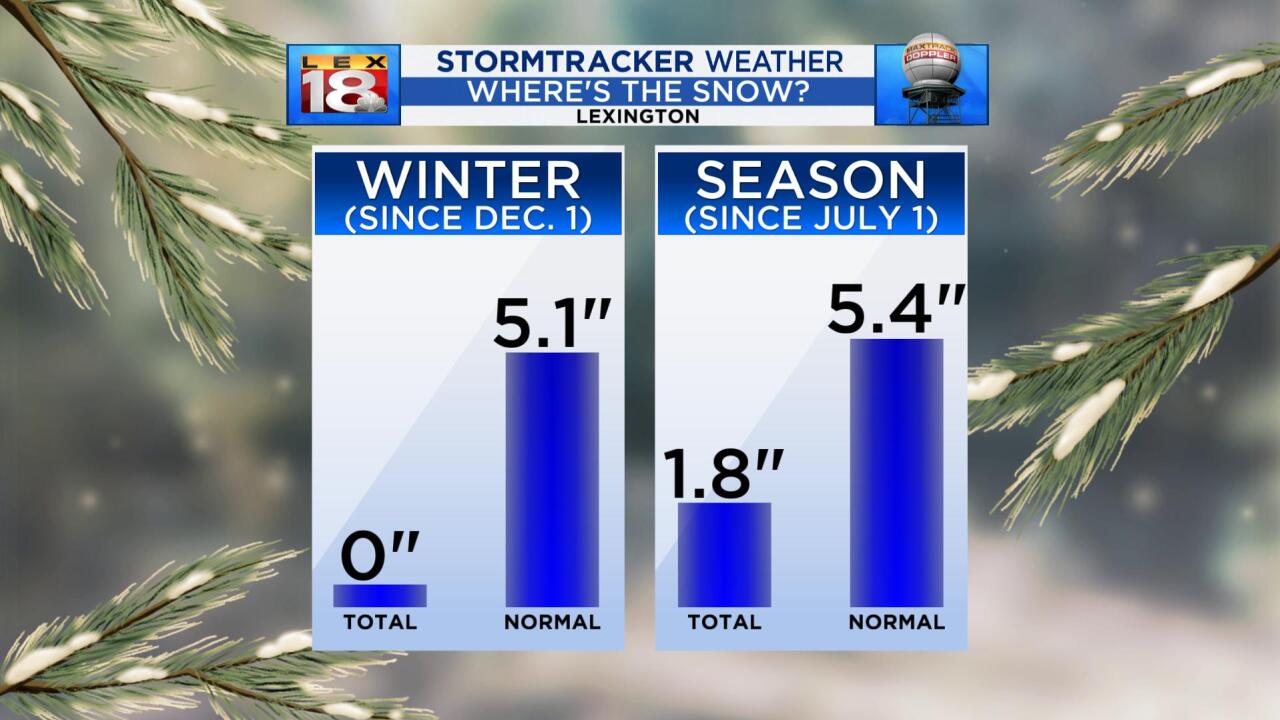 To say the least this winter as been a let down for snow lovers. Since the beginning of Meteorological Winter (December 1st) Lexington has only recorded a trace of snow. All of the snow that we have seen this season came in November. Even then it was less than two inches.

There has been no shortage of things falling from the sky. The warmer winter temperatures has brought us plenty of rain. Since December 1st Lexington has picked up 8.26" of rain. That's a two inch surplus.

So when will it snow? We are heading into Lexington's snowiest snow on average. February's normal snowfall is around four and a half inches. (Lexington averages 13 inches of snow over the course of the year.) A relatively snow-free start shouldn't be an indicator that the remainder of winter will be snow-free. You may remember during the second half of winter 2014-2015 we picked up three feet of snow. Lexington has never gone an entire winter without measurable snow. The least snowy winter was in 1931-1932 with a season total snowfall of 0.1".

We have a little snow in the weekend forecast. The event begins as rain. Friday morning will feature widespread steady rain before becoming showery into the second half of the day. The strong low will trek out of the Midwest into the Great Lakes on Saturday. The backlash of the system will pull some colder air into the Bluegrass and interact with some lingering moisture. There is a chance for rain and snow showers. Don't get excited about any accumulations. Temperatures will climb into the mid 30s Saturday. Northern Kentucky and the southeastern ridges will have a "greater" chance of seeing a coating of snow.

Outside of Saturday's snow possibility, our chances aren't great for snow over the next 10 days. Temperatures will remain near- or above-normal with highs in the 40s through the end of January. Very cold air is establishing itself across the North American continent. It is just locked up over Alaska. Once this cold air is let loose and can work southward, then we'll talk about when we could see some form of real snow.