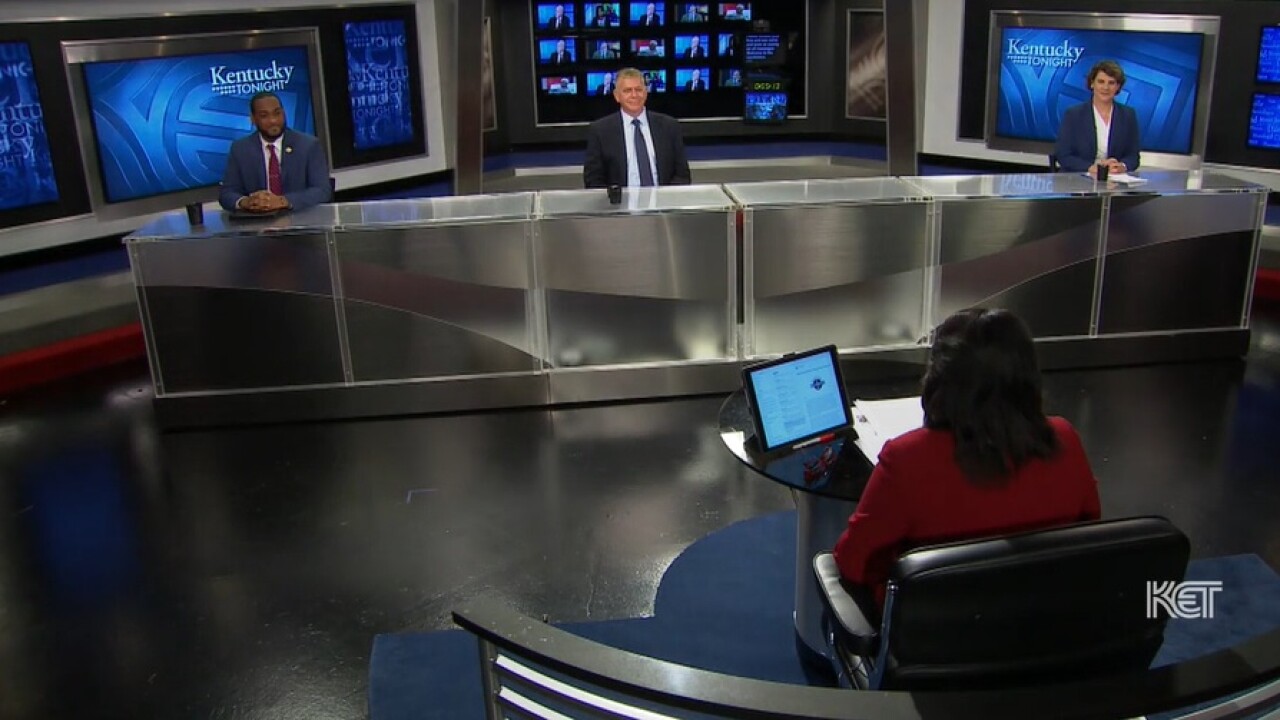 In Louisville, "I can't breathe," chants were heard throughout the day.

As protests for change in policing took place across Kentucky and the United States, the three prominent Kentucky Democrats running for U.S. Senate took part in KET's candidate forum.

Charles Booker, a state representative from Louisville, arrived straight from the protests in Louisville.

"Barely made it today because I left the streets where so many Kentuckians are demanding justice and accountability," said Booker.

Booker is the only one who participated in the protests. He said he was tear-gassed over the weekend and spent Monday at the site where David McAtee was killed.

Amy McGrath, the Democratic front-runner, said she's been following along with the news. However, she has not attended any of the protests because of the coronavirus.

"We're also in the middle of a pandemic, so we also have to look at - is that the place to be right now?" said McGrath.

Mike Broihier, a marine turned Lincoln County farmer, said he did not attend the protest because he did not want to seem like he was using the protests for his political advantage.

"We don't use people as props," said Broihier. "And I thought about it and said if I went to Louisville or Lexington, it would've appeared opportunistic."

The candidates were challenged on issues of systemic racism, police brutality, and the way to fix it.

Booker, the only major candidate who is black, pressed for change. He said he understands the frustration people are feeling right now because he's experienced it himself.

"That's my story. I've lived that. I've been in those streets demanding justice after my cousins were murdered the last four years. This isn't a tweet from me," said Booker. "It isn't aspirational to just say we need to listen and do more. We need results right now, and it means we have to acknowledge the challenges that are levied within our institutions that see someone that looks like me, who doesn't come from a lot, as a deadly weapon before a human being."

Booker said he wants a citizen review board with subpoena power and laws that eliminate no-knock warrants to break the systemic racism in law enforcement. That's the warrant Louisville Police used when Breonna Taylor was killed.

McGrath, who spent a big part of her life in the military, thinks there needs to be a better command climate for officers.

"In the military, when you have a unit, everybody that is under you is a reflection of the leader. Their actions are a reflection of that leadership," said McGrath. "So in the case of George Floyd in Minneapolis and his really tragic and unfortunate death, you not only had a bad cop doing terrible things, but you had three other cops looking on doing nothing."

McGrath believes that a command climate would demand accountability and allow independent investigations when an officer kills a citizen.

Broihier thinks the way forward starts with demilitarizing the police.

"We can start the process by stopping selling military equipment to police forces. There's no reason that a municipal police department or a county police department needs to have armored vehicles," said Broihier. "It sets the wrong mindset, and the police think they're at war. At war, you need an enemy, and the enemy, sadly too many times, are African Americans."

Broihier also called for criminal justice reform. He believes too many people, particularly African Americans, are being arrested.

Booker, McGrath, and Broihier all believe they are the best candidate to take on Senate Majority Leader Mitch McConnell. The Primary is June 23rd.

McConnell addressed the killings of Ahmaud Arbery, Breonna Taylor, and George Floyd on the Senate floor on Monday.

"In no world whatsoever should arresting a man for an alleged minor infraction involve a police officer putting his knee on a man's neck for nine minutes while he cries out 'I can't breathe' and then goes silent," said Mitch McConnell on the Senate floor. "To me, to a great deal of my fellow Kentuckians, and to millions of outraged Americans, these disturbing events do not look like three isolated incidents. They look more like the latest chapter in our national struggle to make equal justice and equal protection of the law into facts of life for all Americans, rather than contingencies that sometimes depend on the color of one's skin. Obviously, this struggle remains incomplete."