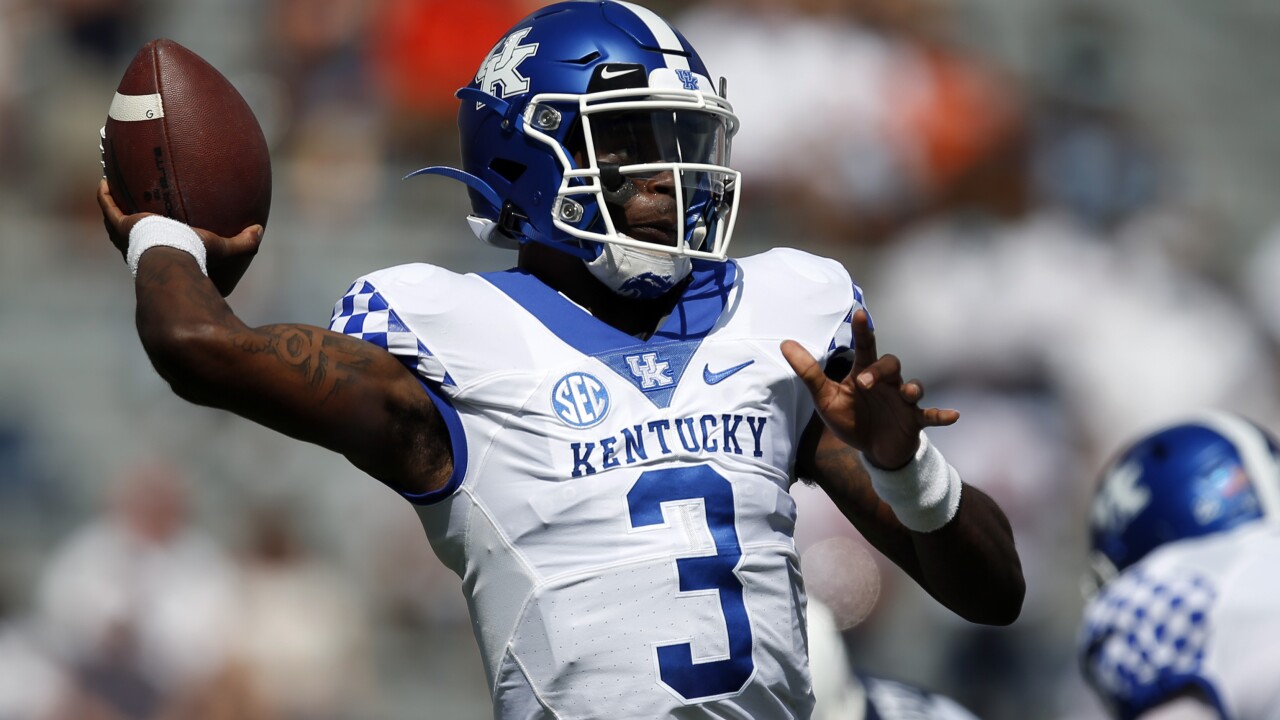 Butch Dill/AP
Kentucky quarterback Terry Wilson (3) throws a pass against Auburn during the first quarter of an NCAA college football game on Saturday, Sept. 26, 2020 in Auburn, Ala. (AP Photo/Butch Dill)

“I’m disappointed in the outcome," said head coach Mark Stoops. "We did some really good things in this game and then did some things we have to improve on. We made too many mistakes to beat a quality opponent like Auburn on the road. There are things that all of us need to do better, but there’s an awful lot of good things."

The Wildcats outgained Auburn with 384 yards, including 239 passing yards and 145 rushing yards.

Terry Wilson saw his first game action since September 7, 2019. He went 24-37 for 239 yards and a touchdown, but had two costly turnovers.

"It's tough to win a game when you have turnovers," said Kentucky quarterback Terry Wilson. "For myself, I have to do a better job of holding on to the ball when I'm running. I just feel like being out for a year, I haven't been hit at all. No excuses but have to be able to hold onto the ball."

A big momentum shift happened at the end of the first half, when Chris Rodriguez looked to cross the goal line that would've given Kentucky a 14-13 lead before halftime.

However, the referee called the run shy of the goal line and the touchdown didn't count (we all know it was a clear touchdown, I don't know what the refs were looking at honestly).

Two plays later, Terry Wilson threw an interception in the end zone that was returned for a 100 yard touchdown. Again, the refs got involved. While replaying the return to see if Roger McCreary stepped out of bounds, the return was called back because of a targeting call on Auburn.

A wild 30 seconds to end the half saw Kentucky head into the locker room trailing 8-7.

Auburn extended its lead in the third quarter when Bo Nix threw an 11 yard touchdown to Seth Williams, making it 15-7 with 5:42 left in the quarter.

Kentucky would respond on the next drive. Wilson threw his first touchdown since returning to the field after tearing his patellar tendon last season, connecting with Akeem Hayes for an 8 yard touchdown. The two-point conversion failed kept the score 15-13 Auburn with 1:00 to play in the third.

Mistakes started to cost Kentucky in the fourth quarter. On a third down attempt, Wilson fumbled the ball putting Auburn deep inside Kentucky territory.

The Tigers would take advantage when Nix connected with Williams for the second time for a touchdown, giving Auburn a 22-13 lead.

Later in the quarter, Kentucky attempted a fake punt with Max Duffy but it went no where. Auburn would again capitalize after Nix threw his third touchdown of the day to Eli Stove and opening the lead to 29-13.

One last Kentucky turnover in the red zone with under two minutes to play sealed the win for Auburn.

Josh Ali led the receiving corps with 9 catches for 98 yards. Kavosiey Smoke led the way on the ground with 7 carries for 62 yards and a touchdown.

Jamin Davis finished with 5 tackles including a sack and a tackle for loss.

The Wildcats have its season home-opener on October 3 against Ole Miss. Kickoff is scheduled for 4 p.m.