Kentucky routed at the hands of Alabama 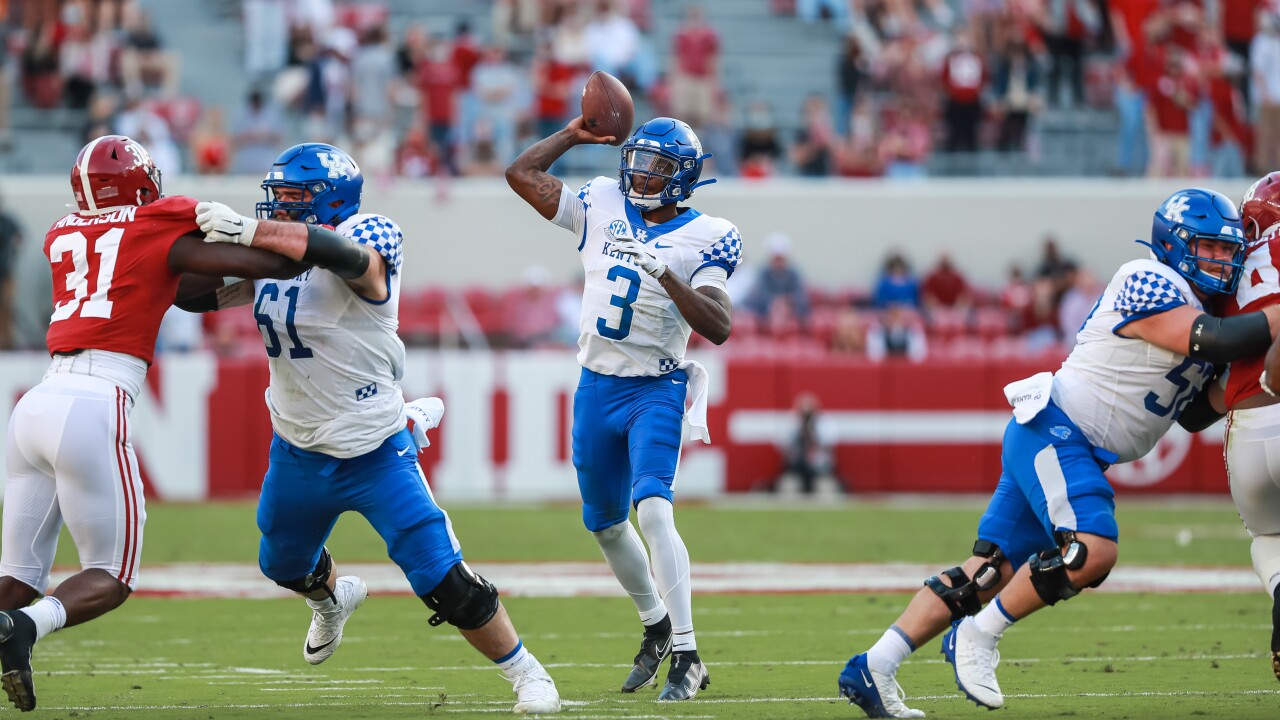 TUSCALOOSA, Al. (LEX 18) — Kentucky suffered one of, if not the, worst loss in the Mark Stoops era, falling 63-3 to Alabama Saturday in Tuscaloosa.

Heisman candidates Mac Jones and Najee Harris led the steamroll for the Tide. Jones, the former Kentucky recruiting target, went 16-24 for 230 yards with 2 touchdowns and an interception.

Harris finished with 83 yards and 2 touchdowns on the ground. Jase McClellan tacked on 99 yards and a touchdown on 10 carries.

Alabama racked up 509 yards of total offense compared to Kentucky's 179.

The Wildcats had moments to put points on the board, as they moved the ball down the field frequently in the first quarter and a half.

Everything fell apart when Kentucky was marching to take a possible 10-7 lead in the second quarter until they had to settle for a field goal attempt that was over-snapped, keeping any sort of points off the board. The Wildcats would never recover.

For the second straight week, all three quarterbacks played for Kentucky.

Terry Wilson went 10-19 for 120 with an interception that was taken the other way for a touchdown. Joey Gatewood went 0-4 on back-to-back possessions, and Beau Allen went 0-2.

Kentucky went into the game very shorthanded, with 16 players not activated due to injuries or COVID-related issues.

The Wildcats were without leading tackler Jamin Davis and leading rusher Chris Rodriguez.

1st Quarter
Alabama would strike first after going 66 yards in 5 plays on its opening drive for a touchdown by Najee Harris to make it 7-0 just over four minutes into the game.

Kentucky would respond on its next possession, hitting some big plays down the field. The Wildcats looked to be knocking on the door for the goal line, but a holding penalty pushed Kentucky back and they would have to settle for a 33-yard Matt Ruffolo field goal, making it 7-3.

2nd Quarter
The Wildcats had a chance to take the lead early in the quarter, but were unable to punch it into the endzone and settling for a field goal try. However, a bad snap would keep any sort of points on the board as Alabama took over in good field position.

The Crimson Tide didn't waste any time, marching right down the field before Mac Jones connected with DeVonta Smith for a touchdown to go ahead 14-3. It was Smith's 32nd career touchdown, most ever by an SEC wide receiver.

Once again the Wildcats had a chance to put some points on the board, but another bad snap led to a missed 42-yard field goal. A reminder, Max Duffy was unavailable for the second straight week. He's the team's original holder.

Sure enough, Alabama took advantage with Najee Harris going 42 yards for a touchdown to make it 21-3.

Just before halftime, Alabama marched 71 yards to make it 28-3 after Jones completed a touchdown to John Metchie III.

3rd Quarter
Alabama was starting to march down the field on the opening possession until Kelvin Joseph intercepted Mac Jones. It was Joseph's fourth interception of the season. Kentucky would go three-and-out on the following possession.

The game was finally put to bed when Terry Wilson threw a pick-6 to Alabama's Jordan Battle to make it 35-3. Joey Gatewood entered the game on the next possession.

The bludgeoning continued when Alabama punched it in from the goal line midway through the 3rd to go up 42-3. At this point, I almost don't feel like providing updates anymore.

Freshmen Bryce Young checked in at quarterback for Alabama and led them right down the field and connected with Smith for a touchdown to make it 49-3.