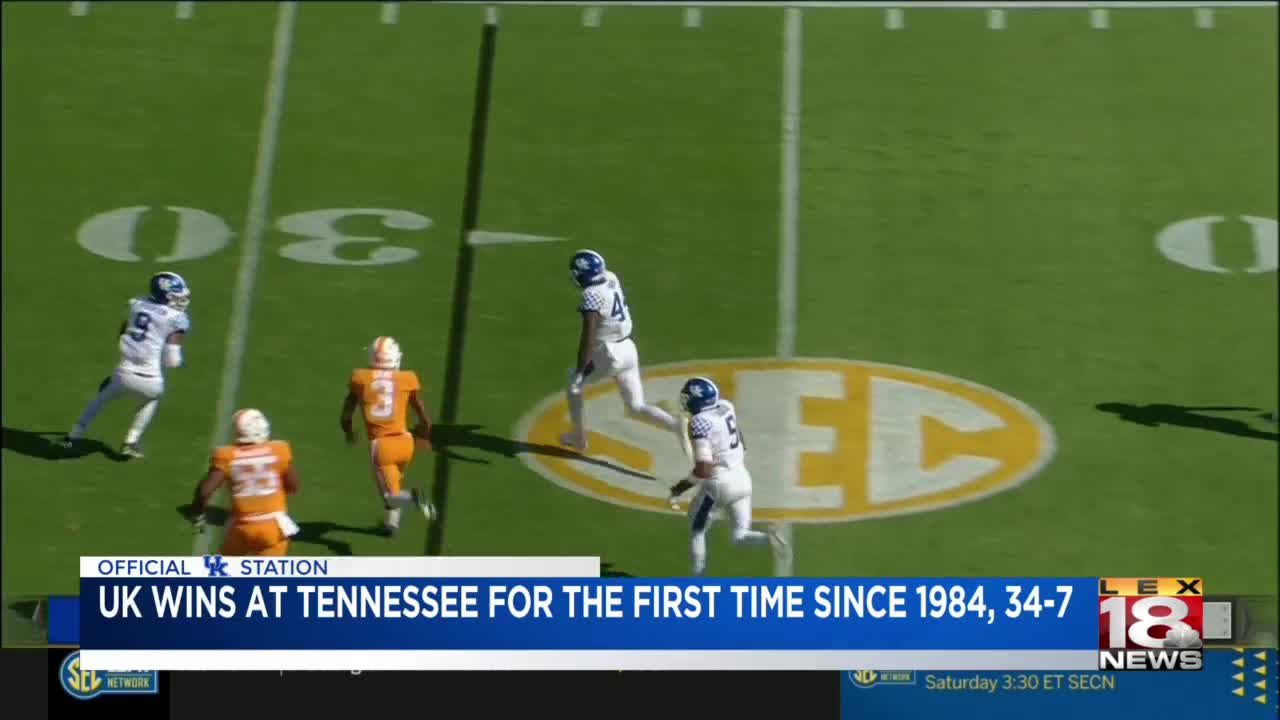 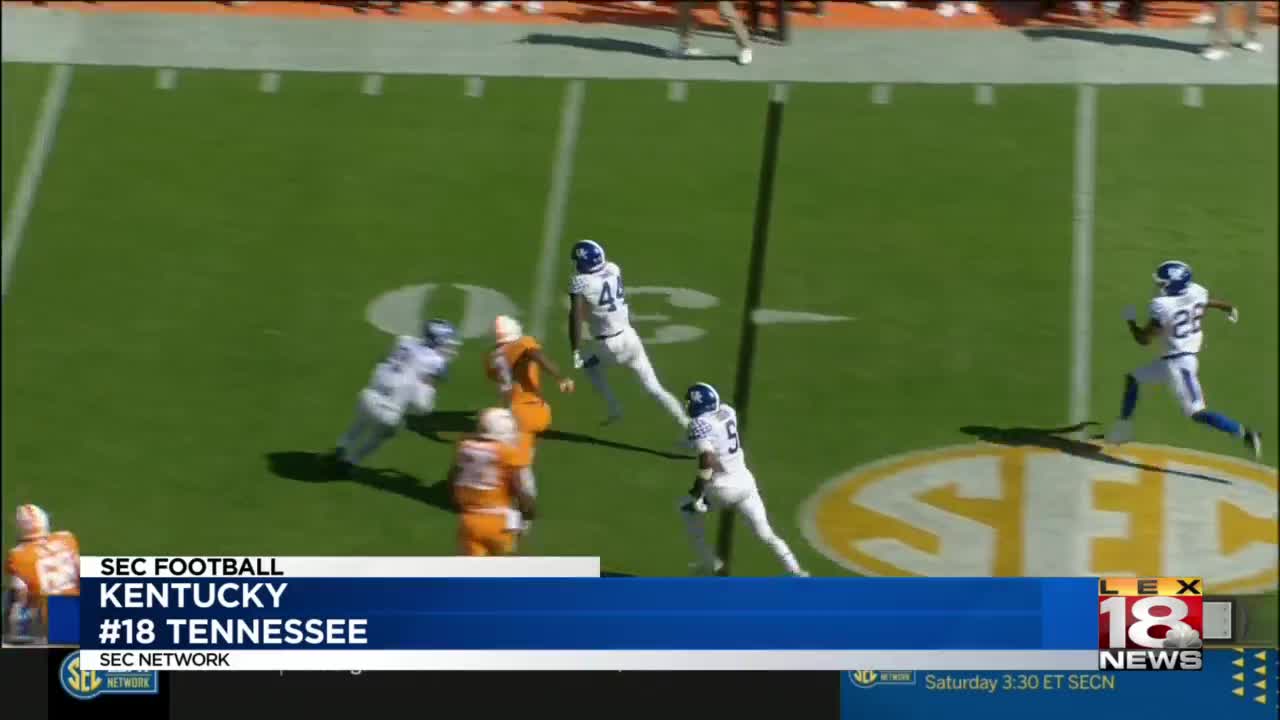 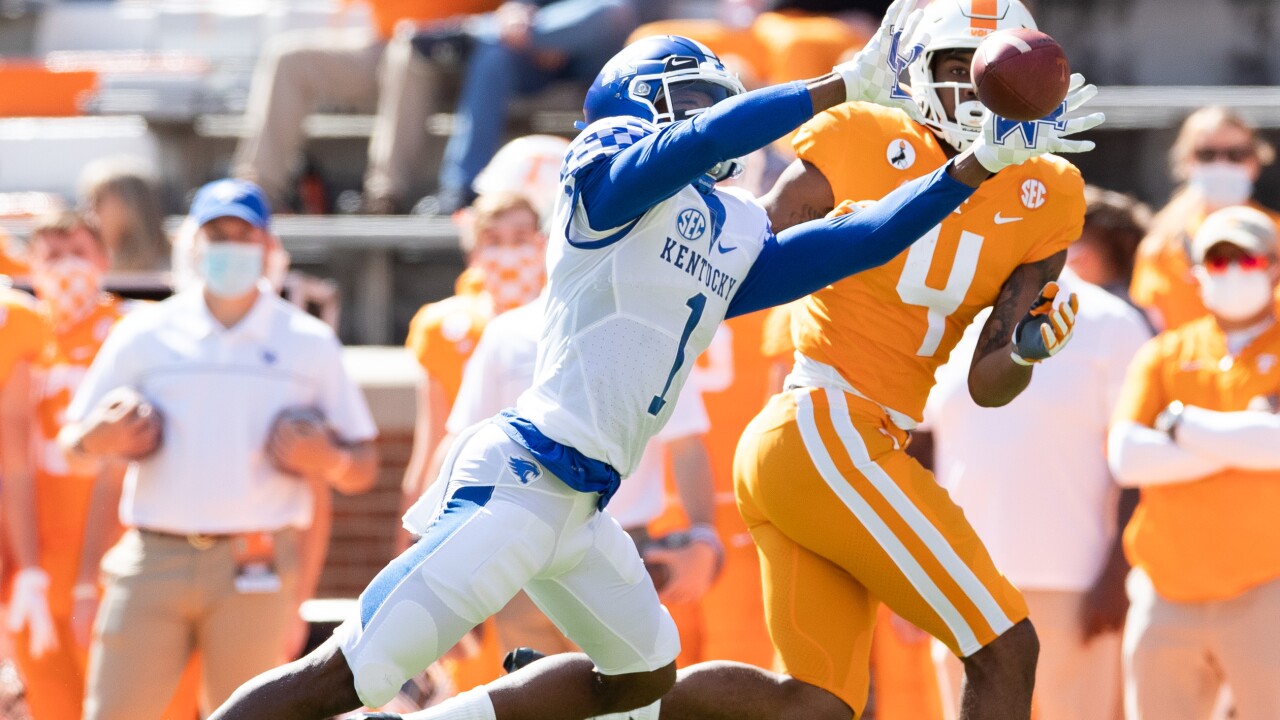 KNOXVILLE, Tn. (LEX 18) — If you were born after November 24, 1984, you've never seen Kentucky football beat Tennessee in Knoxville. Until today.

The Wildcats, behind a dominating defensive effort, took down the Volunteers for the first time in 17 games played at Neyland Stadium.

The defense forced four turnovers in the opening half, including two pick-six's from Kelvin Joseph and Jamin Davis. The four turnover's forced in the first half were the most by a Tennessee opponent since 2008.

Kentucky's defense forced zero turnovers in its first two games this year, but have turned it around completely, forcing 10 turnovers, including three pick-six's, in its last two outings against Mississippi St. and Tennessee.

After a slow start in the first half, the offense began to click in the second half, going 14 plays for 76 yards and a touchdown on its opening drive of the third quarter, making it a 24-7 game.

Terry Wilson finished the game 12-15 for 101 yards and a touchdown to Allen Dailey.

Chris Rodriguez made his case to be the top running back on the roster after rushing for 73 yards and a touchdown, including some tough extra yard runs down the stretch before giving Kentucky a 34-7 lead in the fourth quarter.

The last time Kentucky held a 27 point lead over Tennessee was in 1935.

Kentucky improves to 2-2 this season and will travel to face Missouri next week.

4th Quarter
Kentucky retained possession to open the quarter and started to wear down and already worn down Tennessee defense. Chris Rodriguez may have taken over the number one running back job with the effort he's shown all season.

Rodriguez punches it in for his first touchdown of the game to make it 34-7.

3rd Quarter
After forcing a three-and-out defensively, the offense picked up its end of the bargain, going 11 plays for 76 yards and a touchdown pass from Wilson to Allen Dailey.

Kentucky had a chance for a dagger-type of drive on its next possession after the defense forced another punt.

The Wildcats started with a big completion to Upshaw before feeding the rock to Juhtahn McClain in Tennessee territory. However, the Wildcats would settle for a field goal to make it 27-7.

2nd Quarter
Kentucky's defense put the Wildcats on the board first following a 41-yard pick six from LSU transfer Kelvin Joseph. It's Joseph's second interception in as many weeks, and is Kentucky's seventh interception in its last two games.

On Tennessee's next possession, the Cats defense comes up again and returns another interception for an 85 yard touchdown. This was also Davis's second interception in as many weeks.

The picks kept coming. After J.T. Shrout came in at quarterback in place for Guarantano, Tyrell Ajian comes away with Kentucky's third interception of the half and fourth turnover of the game. The four turnovers in the half is the most Tennessee has had since 2008.

Kentucky's offense had a missed touchdown opportunity midway through the quarter, but Wilson's pass was dropped by Keaton Upshaw in the endzone. Matt Ruffalo would kick a 30-yard field goal to make it 17-0.

Quinton Bohanna went down with what looked like a left leg injury. He was in a lot of pain after being rolled up on. He was helped off of the field but put zero pressure on his left leg while leaving the field.

Tennessee got on the board thanks to a 14-play, 75 yard drive capped off by a 4 yard rushing touchdown from Ty Chandler. On the drive, the Vols ran the ball 12 times for 71 yards.

Kentucky's defense held its own, also forcing a turnover on quarterback Jarrett Guarantano the following possession, which was forced by JJ Weaver and recovered by Marquan McCall. Jamar Watson also added a sack while wearing Chris Oats' number 22.

Terry Wilson finished the quarter 5-5 for 42 yards, but didn't push the ball up the field too much.