Highlights and postgame reaction from EKU's 53-7 victory over Valparaiso 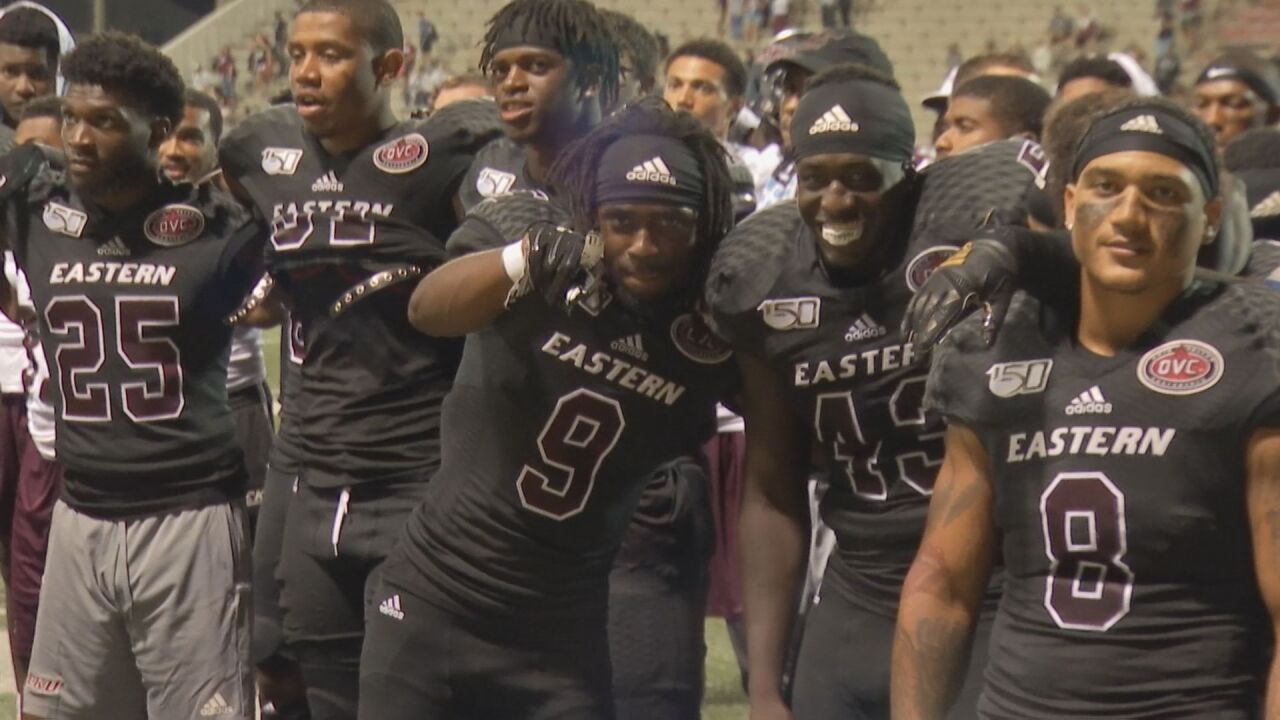 RICHMOND, Ky. – Daryl McCleskey Jr. got things started with a 64-yard touchdown run, Corey Glass returned a fumble for a touchdown and Alonzo Booth scored twice on the ground in the first half as the Eastern Kentucky University football team opened its season with a 53-7 rout of Valparaiso University on Thursday at Roy Kidd Stadium.

On the fifth play of the game, McCleskey ran around the right side, found a seam and went untouched for 64 yards. Dakota Allen ran in a two-point conversion for an early 8-0 lead.

On the second play of Valparaiso’s first possession, Chris Duncan was sacked by Steven Crowder and fumbled the ball. Corey Glass scooped and scored from 29 yards out. The ensuing point-after made it a 15-0 game.

Booth put the game away with two early second quarter touchdown runs. He capped a 10-play, 76-yard drive with a 10-yard scoring run with 14:53 on the clock. A little over four minutes later he scored from two yards out to finish off a short 27-yard drive. Samuel Hayworth’s extra-point put EKU on top 29-0.

Hayworth added a 31-yard field goal with 4:01 to go before halftime and the Colonels had a 32-0 advantage at the break.

Eastern out-rushed Valparaiso 140 to 14 in the first half and held a 206-47 advantage in total offense.

The Crusaders got on the board with 11:41 to go in the third quarter on a 61-yard pass from Duncan to Ollie Reese. Jason Lewis became the third running back to score for the Colonels when he polished off an 8-play, 68-yard drive with a 1-yard touchdown run with 7:41 left in the third.

On the first play of a fourth quarter EKU possession, Booth scored for the third time when he took the ball, ran around the right side and 86 yards to the end zone. The kick made it 46-7 with 9:50 left in the game. Dakota Allen capped the scoring with a 5-yard touchdown pass to Alex Cabrera with 2:11 left in the game.

Booth finished the night with 128 yards on seven carries and three touchdowns. McCleskey totaled 70 yards on four touches. Eastern Kentucky held a 333 to 68 advantage on the ground.

Glass had a team-best eight tackles. Aaron Patrick had five tackles, 2.5 tackles for a loss and one sack.

Duncan finished 7-of-19 for 116 yards for Valparaiso. Cody Boxrucker rushed for a team-high 45 yards. Jaxon Peifer totaled a game-high 10 tackles for the Crusaders.

The Colonels will travel to face the University of Louisville on Saturday, Sept. 7. Game time at Cardinal Stadium is scheduled for 7 p.m.