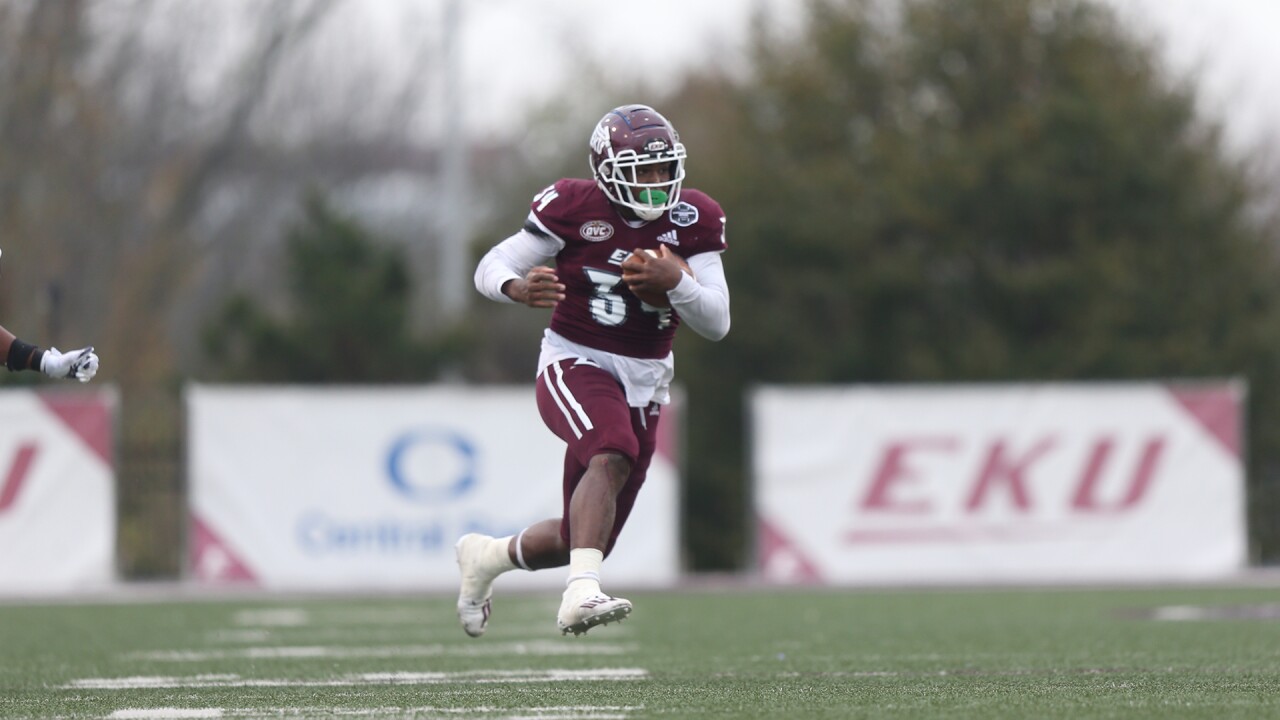 RICHMOND, Ky. — Eastern Kentucky University’s football team had scoring plays of 94, 69, 63 and 66 yards on its way to beating Western Carolina University, 49-17, in the 2020 Opportunity Bowl presented by Raising Cane’s on Saturday at Roy Kidd Stadium.

The game turned on a series of big plays in the second quarter. With EKU up 7-3 and having driven to the WCU 36 yard line, Ricky Palao picked up a fumble and returned it 54 yards for a touchdown to put the Catamounts ahead 10-7. On the ensuing kickoff, the Colonels took the lead right back when Davion Ross returned the kick 94 yards for a touchdown.

After Western Carolina was forced to punt on its next possession, Eastern extended the lead. On the sixth play of the drive, Isaiah Velez found Alonzo Booth over the middle near the WCU 40 yard line. The 250-pound running back accelerated across the field and turned it into a 69-yard touchdown catch. The point-after made it 21-10 in favor of the Colonels.

Ross’ kickoff return for a touchdown was the first for an EKU player since Jared Sanders took it 90 yards to the house at Austin Peay on Nov. 12, 2016.

Eastern Kentucky led 21-10 at halftime. The Colonels held the Catamounts to 33 yards passing and 104 yards of total offense in the first half. Meanwhile, EKU rolled up 229 yards of offense, including 171 through the air.

The score remained 21-10 until early in the fourth quarter when two more big plays put the game out of reach. On the third play of a drive that began at the EKU 10 yard line, Velez lateraled to Jackson Beerman who then threw down the right sideline to Jacquez Jones. Jones completed the play for a 63-yard touchdown catch and run.

Daulson Fitzpatrick intercepted the ball for Eastern at the WCU 34 yard line on the second play of the Catamounts’ next possession. Velez hooked up with Keyion Dixon for 24 yards on the first play. On the next, Booth took it to the house from six yards out. The extra-point made it 35-10 with 13:18 left in the game.

Velez added a 66-yard touchdown pass to Beerman with 11:23 remaining. The redshirt freshman quarterback playing in only his second collegiate game finished 18-for-32 for 310 yards. He had two touchdown passes.

In addition to throwing a touchdown pass, Beerman caught five passes for 102 yards and a touchdown. Jones had five catches for 100 yards. Booth ran for 178 yards on 27 carries and scored three rushing touchdowns. He also had the one reception for 69 yards and a score.

EKU totaled 590 yards of offense while holding WCU to 255 yards. The Colonels converted 9-of-17 third down attempts.