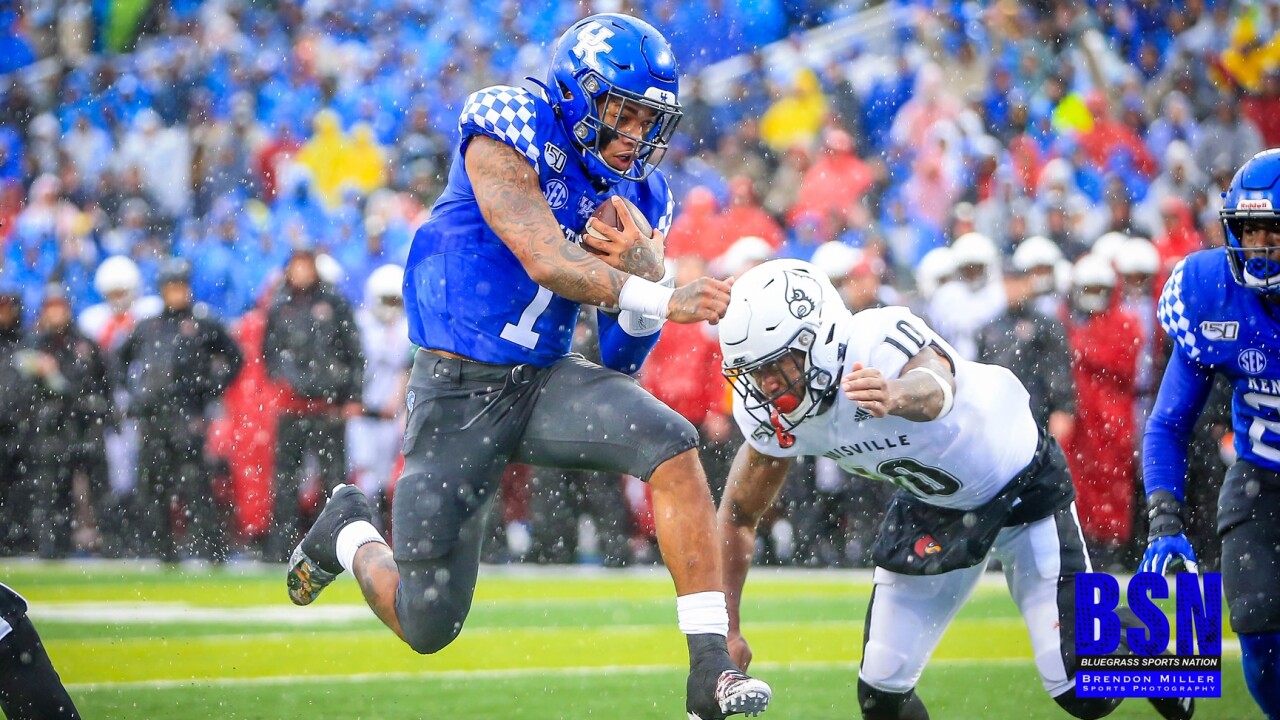 LEXINGTON, Ky. (LEX 18) — Kentucky and Louisville are meeting for the annual Governor's Cup and the Wildcats took a 17-13 lead into the half.

This could be one of the lowest turnouts for a Governor’s Cup game. And I’m not sure I blame the fans for watching this rain drenched game on TV. pic.twitter.com/QxQxYtmwh0

Louisville had the first possession and Micale Cunningham had a big play on 2nd and 11. UK had put a lot of pressure on him from the defensive front when Cunningham broke out for a 9 yard gain to keep the drive alive. The Cardinals ran for 39 yards and passed for 36 on the drive.

The final 33 was a touchdown pass from Cunningham to Tutu Atwell for 33 yards. A missed PAT made it 6-0 Louisville.

The Wildcats, again, started Lynn Bowden at quarterback and in the driving rain, UK kept it on the ground. He picked up 26 yards on three carries. Chris Rodriguez had one rush for 18 yards and the Wildcats picked up some more yardage on that play from a U of L personal foul. A.J. Rose finished off the drive with a four yard touchdown. UK would hit the PAT to lead 7-6.

The Kentucky defense stopped U of L on its next possession but the Wildcats were backed up to their own 6. They gained some yards but penalties moved them back. That's when Kavosiey Smoke took off on a 70 yard gain. Lynn Bowden finished off the 94 yard drive with a 6 yard touchdown run. 14-6 UK in the lead.

Kentucky goes 94 yards on its second possession of the game. Kavosiey Smoke getting the big run for 70 yards and Lynn Bowden finishes the drive with a 6 yard touchdown run. Wildcats lead Louisville 14-6 with 12:43 to go in the 2nd quarter.

The defense would, once again, stop the Cardinals who lined up to punt. It was a fake as the punter handed the ball behind his back but the Wildcats weren't fooled and took over just outside of the Louisville 30. The Wildcats would have to settle for a 45 yard field goal from Matt Ruffalo. 17-6 Kentucky.

That was a neatly designed fake punt by the Louisville. The punter handed it behind his back but the Wildcats were not fooled and now UK has it in U of L territory outside the 30 yard line.

On Louisville's next possession, Cunningham was looking to hit a deep pass. The ball was tipped and Jordan Griffin intercepted it inside the UK 20. They would eventually punt for the first time in the game.

What great concentration on that play from Jordan Griffin on the interception. Brandin Echols actually tipped it and it went straight into Griffin's hands. UK takes over inside its own 20.

After stopping Louisville, UK went for its own 4th down play and Lynn Bowden was stopped at the U of L 44 yard line with :35 to play in the half. The Cardinals would make UK pay. Javian Hawkins would take the hand off and use a wide open hole to carry 56 yards for the touchdown with :19 to go in the half. Kentucky's lead was down to 17-13.

That was the score going into the break as UK out gained Louisville 205 yards to 199. All but four yards of that was on the ground.
Bowden led the way with 92 yards.