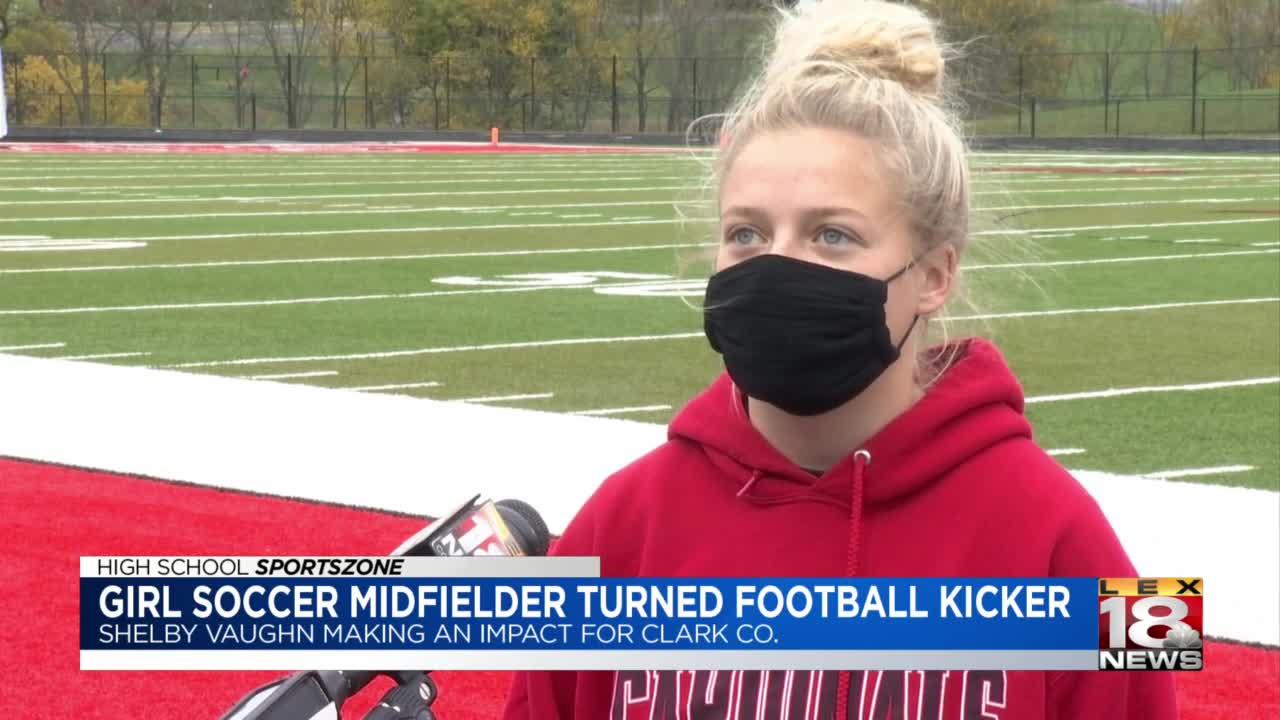 WINCHESTER, Ky. (LEX 18) — The Clark County girls soccer team had its season come to an end after falling 3-1 to Bishop Brossart on Oct. 21 in the 10th Region final.

It was also the final game for senior midfielder Shelby Vaughn.

"Well, I didn't think that would be the last time," said Vaughn. "We had a pretty good chance of winning but we didn't come out and play our best so we were all pretty shocked."

Vaughn was one of the top performers for the Lady Cardinals and finished second in goals and points scored.

One day at soccer practice, before the season came to an end, a new opportunity presented itself when she caught the eye of Clark County football coach Oliver Lucas, who was in desperate need of a kicker.

"We had been decimated at that position," said Lucas. "We lost three games because of three points because we just wasn't putting it through the upright."

"My coach said if you could make a field goal from the 30-yard line then the team won't have to run," said Vaughn. "The football coaches were still here and they said 'just kick it with a football.' I was like 'OK.' So a couple of us tried it."

"The we said 'Oooohh....oooooohhhh,'" Lucas described as he watched Vaughn attempt field goals.

"Then they asked me if I wanted to do it for the team, like, actually be on the team," said Vaughn. "I thought they were kidding and I was like 'No I'm not doing that.' I talked to my family about it and they talked me into it, so, I'm on the team now."

On Oct. 23, Vaughn suited up and made her high school football debut to attempt an extra point.

"I was so scared. I went out there, I was shaking, I could feel myself shaking," said Vaughn.

"Going out there, I told the players in advance if anyone hit her, I'm going to make all of you take your pads off and go sit in the stands," laughed Lucas.

She went out and made the kick, becoming the first female to score a point in Clark County football history.

That night, she went on to make six total extra points.

"I'm proud of it. I feel lucky," said Vaughn. "They've asked a lot of soccer girls the past few years and they all said no so I'm glad that I stepped up."

"She's really opened the doors for young ladies to feel like they could come out and do something and be contributing," said Lucas. "No matter what the sport is, they can contribute if they come out and do it. We're not going to discriminate by no means. My favorite player is 'winner.'"

Two of Clark County's losses have come by a combined three points. The Cardinals have won their last two games.