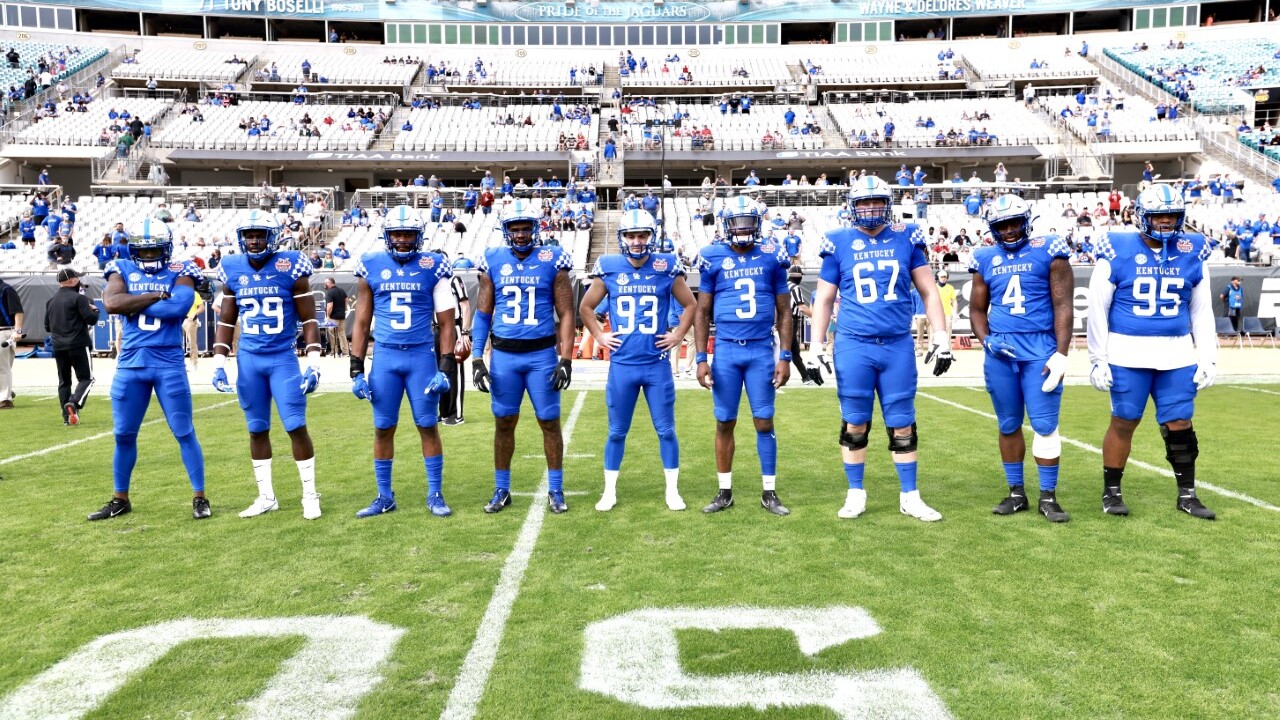 JACKSONVILLE, Fla. — Kentucky used three interceptions and a powerful running game to win the Taxslayer Gator Bowl 23-21 over N.C. State. It's the Wildcats third straight bowl victory, including the Citrus and Belk Bowls, in the last five postseason games.

The Wildcats started the game by setting the tone. UK held onto the ball for the first nine minutes, driving 68 yards and yet having to settle for a 25 yard field goal by Matt Ruffolo. Kentucky would take the quick 3-0 lead.

N.C. State was moving the ball on its first possession but Brandin Echols intercepted Bailey Hockman to end the first drive for the Wolfpack. Kentucky would drive it down to the N.C. State 31 but saw their drive end when Chris Rodriguez couldn't convert a 4th and 1.

A couple of possessions later, Kentucky put together a drive that included long runs from Chris Rodriguez, A.J. Rose and Kavosiey Smoke. Rodriguez would be the guy to finish the drive with a four yard run out of the Wildcat offense. UK would lead 10-0.

N.C. State put together another long drive and set themselves up for a field goal attempt but Tyrell Ajian was able to come off the corner and get a hand on it. The kick fell short and UK kept its 10-0 lead. Kentucky was able to drive 69 yards in seven plays to give Ruffolo another shot to score and he hit from 26 yards out to give UK a 13-0 lead at the half.

The Wolfpack started the second half with a strong drive that went 43 yards deep into UK territory but Christopher Dunn missed 41 yard field goal. After a UK drive stalled, N.C. State moved the ball again and on 4th and 6, Bailey Hockman hit C.J. Riley for a nine yard touchdown to get the Wolfpack on the board. UK's lead was cut to 13-7.

The Wolfpack got the ball back in the 4th quarter with just over nine minutes to play at its own 10. Hockman was picked off by Yusuf Corker to put UK in business. Rose would pick up 27 yards to get down to the three yard line. UK would have to settle for a 20 yard field goal from Ruffolo to extend the lead to 16-7 with 5:45 to go in the game.

Kentucky picked up two personal foul penalties on the kick return by N.C. State putting them in UK territory. It only took 3 plays to get the touchdown as Zonovan Knight took it in 13 yards to cut the Wildcats lead to 16-14 with 4:46 to play in the game.

UK couldn't move it and had to punt to the Wolfpack with just over three minutes to go in the game. But, DeAndre Square tipped a Hockman pass and Jamin Davis picked up the Wildcats third interception of the game. From there Chris Rodriguez finished it off with the 26 yard touchdown run.

N.C. State didn't give up as Jordan Houston added a two yard touchdown run with 1:10 to go in the game. UK up only 23-21 but the Wildcats recovered the on-side kick to end the game.

In his last game for the Wildcats, Terry Wilson completed 12-20 passes for 99 yards. A.J Rose led the ground attack with 12 carries for 148 yards, Rodriguez had 17 carries for 84 yards and two touchdowns and Kavosiey Smoke had nine carries for 45 yards.

The Wildcats end this season with a 5-6 record.