UK announces its Hall of Fame Class of 2020 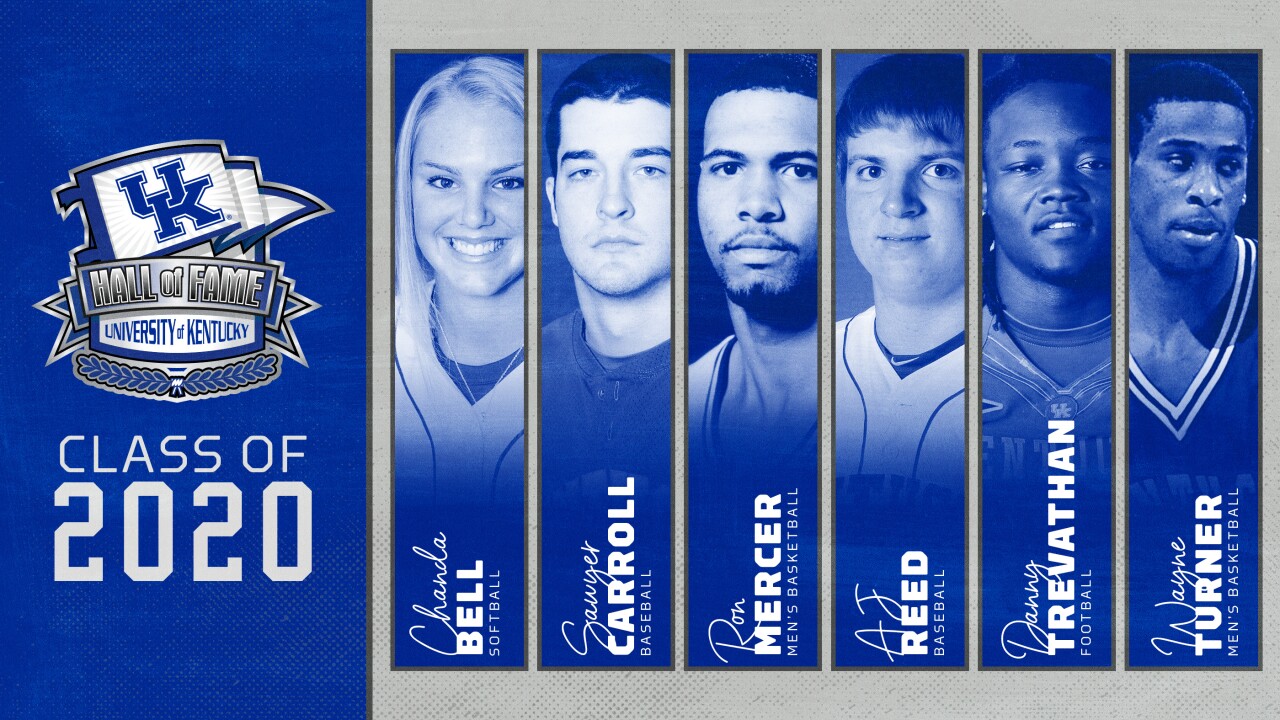 LEXINGTON, Ky. — The University of Kentucky announced its Hall of Fame Class for 2020 which includes six former student-athletes.

The former Wildcats represent baseball, softball, basketball and football. It includes two basketball National Champions with Ron Mercer and Wayne Turner and a baseball National Player of the year in A.J. Reed.

The new Hall of Famers will be featured on “BBN Live” Thursday and Friday at 3 p.m. “BBN Live” can be seen on Twitter at @UKAthletics and on Facebook at Kentucky Wildcats. They will be inducted at a later date which is usually in September.

Here is a list of the former Wildcats and the accomplishments by the Class of 2020:

Her arrival in 2009 coincided with the emergence of UK softball as a national power … Led UK to its first four NCAA Tournament appearances in school history, including UK’s first Super Regional … Won 68 games with a career ERA of 2.55 … Still holds five school records, including strikeouts in a game (16), season (288) and career (910) along with lowest opponent batting average in a season (.175) and career (.200) … Threw five no-hitters, including the first no-hitter (2009) and first perfect game (2012) in UK history … National Pitcher of the Week in 2012 … Two-time SEC Pitcher of the Week and SEC Freshman of the Week … 2009 SEC All-Freshman Team … UK student assistant coach in 2013 … Assistant coach at Marshall (2014-17) and Indiana (2018-present).

Member of the 1996 national championship team as well as the 1997 national runner-up team … NCAA consensus All-America first team in 1997 … Named to the 1996 NCAA Tournament All-Final Four Team … Named Freshman All-SEC in 1996 … 1997 NCAA Tournament All-Final Four Team … 1997 NCAA Tournament West Regional Most Outstanding Player … SEC Player of the Year by league coaches and AP in 1997 … 1997 SEC Tournament MVP … Scored 725 points in his sophomore season, at the time the fifth most in a season in program history … Member of Kentucky’s 1,000-point club (1,013) … Declared for the 1997 NBA Draft after his sophomore season … Drafted in the first round, sixth overall, by the Boston Celtics … Played eight seasons in the NBA.

Most accomplished player in UK history … 2014 unanimous National Player of the Year, by seven selectors, when he had arguably the greatest single season in college baseball history – .336 batting average, 23 home runs, 73 RBI while going 12-2 as a pitcher (Friday starter) with a 2.09 ERA … Led the nation in homers and slugging percentage (.735) … Also the SEC Player of the Year and SEC Male Athlete of the Year (all sports) … Two-time first-team All-SEC … Freshman All-American in 2012 … Career stats feature .306 average, 40 HR and 168 RBI, along with 19-13 pitching record and 2.83 ERA … Four-year major-league veteran with the Houston Astros and the Chicago White Sox.

Two-year All-America linebacker … First All-America linebacker in school history … Chosen National Linebacker of the Year by the College Football Performance Awards after monster senior season in which he totaled 143 tackles, 11.5 tackles for loss, four interceptions, five caused fumbles and five pass breakups … Led the SEC in tackles as a junior and senior, earning first-team All-SEC honors both years … First-team All-America as a junior with 144 stops … Selected in the NFL Draft by the Denver Broncos … Led Denver in tackles two years, with the team advancing to the Super Bowl in both of those seasons, including one Super Bowl championship … Eight-year veteran with Denver and the Chicago Bears.

Member of 1996 and 1998 national championship teams as well as the 1997 national runner-up team … Finished his career as UK’s and the NCAA’s all-time games played leader with 151 games (now ranks second) … UK’s all-time steals leader with 238 … Member of UK’s 1,000-point club (1,170) … During his career, helped Wildcats to two SEC regular-season championships and three SEC Tournament championships … Named to the 1997 NCAA Tournament All-West Regional Team … Named the 1998 NCAA Tournament All-South Region Most Outstanding Player as well as the 1998 SEC Tournament MVP … Named All-SEC third team in 1999 and was also named to the SEC All-Tournament Team … Played one season in the NBA.