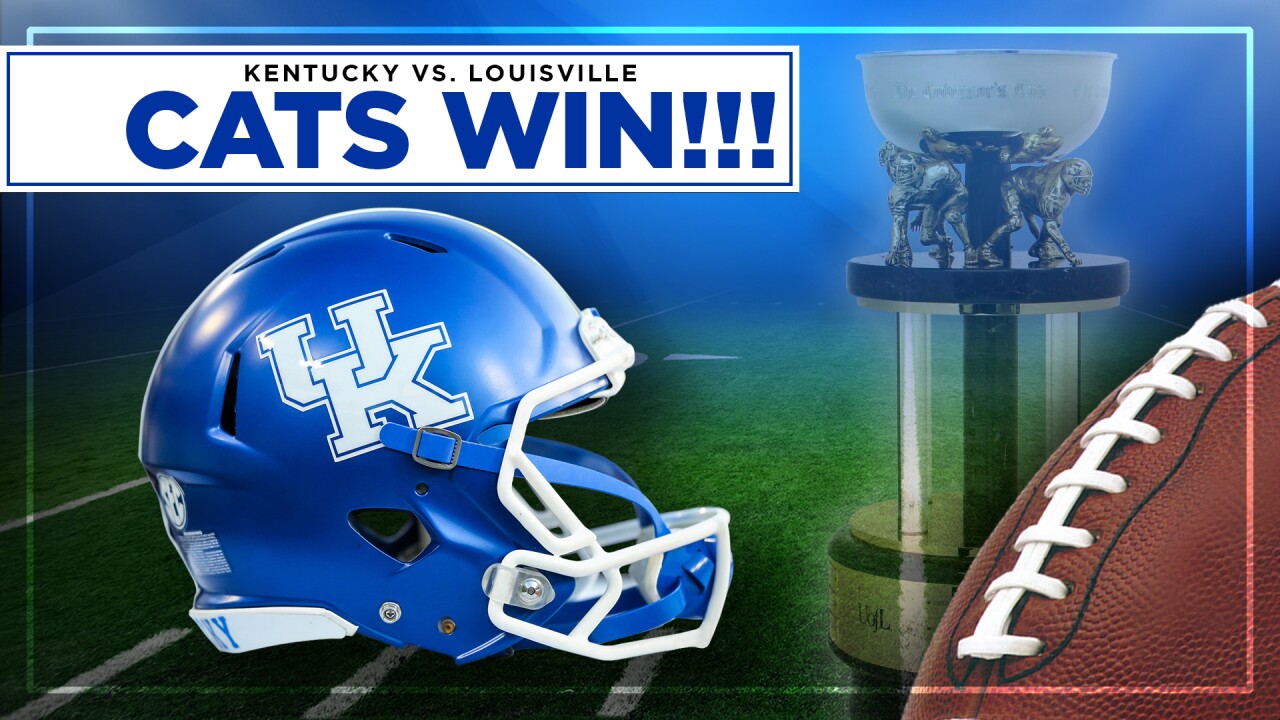 LEXINGTON, Ky. (LEX 18) — Kentucky and Louisville meeting for the annual Governor's Cup and the Wildcats would win for a second straight year, 45-13.

Louisville had the first possession and Micale Cunningham had a big play on 2nd and 11. UK had put a lot of pressure on him from the defensive front when Cunningham broke out for a 9 yard gain to keep the drive alive. The Cardinals ran for 39 yards and passed for 36 on the drive. The final 33 was a touchdown pass from Cunningham to Tutu Atwell for 33 yards. A missed PAT made it 6-0 Louisville.

The Wildcats, again, started Lynn Bowden at quarterback and in the driving rain, UK kept it on the ground. He picked up 26 yards on three carries. Chris Rodriguez had one rush for 18 yards and the Wildcats picked up some more yardage on that play from a U of L personal foul. A.J. Rose finished off the drive with a four yard touchdown. UK would hit the PAT to lead 7-6.

Incredible what @LynnBowden_1 has done this season. He's now crossed the 1,000 yard mark for the season. Just the 9th Wildcat to accomplish that.

The Kentucky defense stopped U of L on its next possession but the Wildcats were backed up to their own 6. They gained some yards but penalties moved them back. That's when Kavosiey Smoke took off on a 70 yard gain. Lynn Bowden finished off the 94 yard drive with a 6 yard touchdown run. 14-6 UK in the lead.

The defense would, once again, stop the Cardinals who lined up to punt. It was a fake as the punter handed the ball behind his back but the Wildcats weren't fooled and took over just outside of the Louisville 30. The Wildcats would have to settle for a 45 yard field goal from Matt Ruffalo. 17-6 Kentucky.

On Louisville's next possession, Cunningham was looking to hit a deep pass. The ball was tipped and Jordan Griffin intercepted it inside the UK 20. They would eventually punt for the first time in the game.
After stopping Louisville, UK went for its own 4th down play and Lynn Bowden was stopped at the U of L 44 yard line with :35 to play in the half. The Cardinals would make UK pay. Javian Hawkins would take the hand off and use a wide open hole to carry 56 yards for the touchdown with :19 to go in the half. Kentucky's lead was down to 17-13.

That was the score going into the break as UK outgained Louisville 202 yards to 199. All but four yards of that was on the ground. Bowden led the way with 92 yards.

Kentucky made up for that mistake at the end of the first half by scoring on just two plays to start the third quarter. Bowden would weave his way around the field on a 60 yard run for the score and a 24-13 UK lead.

The teams would trade possessions and on a 3rd down run by Bowden he stayed down before limping off with what appeared to be a left foot or ankle injury. The Cats would punt the ball away.

Bowden came back in the game and used four plays to score again. And it was Bowden that finished it off from 46 yards out. He crossed 1,000 yards for the season. Just the 9th player in UK history to accomplish the feat. UK would take a 31-13 lead late in the 3rd quarter.

Start of the 4th quarter, UK made a stop and used one play to score again. This tie it was a handoff to Christopher Rodriguez who out-raced everyone for a 64 yard touchdown. UK would take a 38-13 lead.

UK would go for a 4th and three and Bowden would take it 32 yards for the touchdown. That put him at 284 yards rushing for the game. It put the Wildcats at 517 overall rushing for the game.
Kentucky beats its rival for a 2nd straight year. Combined in those two games the score has been 101-23.

In a post-game press conference, Mark Stoops said that he "felt like we were in control the whole game except the end of the first half. I got aggressive and felt our defense could stop but it didn't take the wind out of our sails."

On Bowden, Stoops said, "What can I say about Lynn? He's truly remarkable. Tough, a leader and if you're going to be an alpha dog, be an alpha dog. Put the team on your back and say let's do this... You can't appreciate enough what Lynn is doing... He was patient and made the extra defender miss. That's the confidence you have in him."

Stoops finished by saying, "Special run this season. The team is proud of themselves. Its hard during that stretch in the SEC. We weren't healthy and didn't play good. It's too easy to give in. We won't have a defeated mentality."

UK improves to 7-5 on the season and now awaits where it will go bowling. That will be announced Sunday, Dec. 8. This will be the fourth straight year the Wildcats have played in a post-season bowl game.