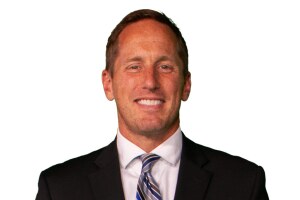 Tom Ackerman is the morning and noon meteorologist for LEX 18. Tom is a Certified Broadcast Meteorologist (CBM), a professional recognition from the American Meteorological Society.

He’s from the small town of Dover, Ohio just south of Cleveland. And although he grew up in the Buckeye State he and his family have been “on the road” for years.

His first move was a four-year tour in the United States Navy. Tom was in charge of launching aircraft off the flight deck of the U.S.S. Eisenhower, a nuclear-powered aircraft carrier. Tom was stationed in Norfolk, Va. and toured most of the Mediterranean, Europe and the Middle East. Prior to coming to LEX18 in 2002, he worked at stations in Wisconsin, North Carolina and South Carolina. Tom has a B.S. in Geosciences from Mississippi State University, a B.A. in Electronic Media/Journalism from Ashland University and is a private pilot.

Tom enjoys spending time with his wife Kera, their daughters Anna and Claire and their dogs Gidget & Evie, both adopted from the Lexington Humane Society.